Jack Ellway (Adam Baldwin) is a marine biologist who travels with his son, Brandon, to the remote pacific island of Malau to observe how underwater earthquakes are affection the marine life.  Two swimmers and a kayaker are pulled underwater and drowned by some creature.  Brandon finds a baby reptile that is 3 feet tall, and keeps it as a pet.  A reptilian, dinosaur like, creature comes ashore and is captured.  This one is a juvenile.  A giant one in the water attacks a boat.  The military is called in.  Greedy bar owner Lawson wants to sell the juvenile to an exotic animal collector.  When Lawson tries to steal the juvenile, it escapes.

The military kill the giant creature on the beach.  In the middle of the night, another giant creature comes ashore, kills the soldiers and takes the corpse of its mate.  Ellway figures out that it is a male and female, with two offspring.  The earthquakes opened an undersea cavern freeing them form their undersea lair.  The female is dead now, and they have the baby.  They take the baby in a boat with speakers, and broadcast its screams to lure the juvenile and father.  Military helicopters follow to drop bombs on the creatures.  Lawson shows up to try and steal the baby.  Lawson and his goons are killed by the big daddy creature. The remaining 3 creatures swim back into their cavern.   The military drop bombs closing the cavern and trapping the creatures back where they came from. 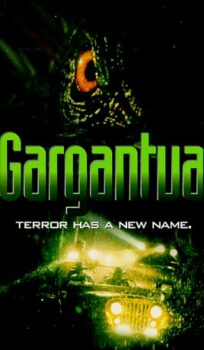