POOPER:
James Brown and Bobby Byrd make up and start performing together again.

LONG VERSION:
James Brown grew up in rural Augusta, Georgia.  After being abandoned by his parents, James was raised by his Aunt Honey (Octavia Spencer), who introduced him to the church and to gospel music.  As a teenager, James (Chadwick Boseman) gets in trouble with the law and ends up in prison.  There, he attends a gospel music performance featuring Bobby Byrd (Nelsan Ellis).  James and Bobby strike up a friendship, and James joins Bobby’s group after he is released from prison.  The group performs gospel standards, but with some R&B and funk added to their music.  One night, they attend a Little Richard concert, and during the intermission, they crash the stage and perform their songs as The Famous Flames.  This gets Richard’s attention, and he later gives James names of people to contact as well as some show business advice, including to beware of the devil that is the white man.

The Famous Flames eventually record an album with Federal Records, but the label wants to release it as James Brown and his Famous Flames.  Their manager Ben Bart (Dan Aykroyd) tells them that James is the true voice of the group.  This angers the band, and all of them immediately quit except for Bobby.  James and Bobby form a new group, and they become a huge hit.  After a successful show at the Apollo Theatre, a woman comes up to James claiming to be his mother.  They talk for a while, then James sends her away.  Sobbing, he then asks Bobby to make sure she is taken care of.  James soon marries a woman named Velma, and they have a son named Teddy.  They later divorce, and James married Dee Dee, while Bobby marries a woman named Vicki.

While James becomes more popular on stage, his off stage life is beginning to fall apart.  Ben, who was always a reassuring voice to James, dies suddenly of a heart attack.  James’ mismanagement of his band leads to them quitting, forcing him to find new musicians again.  After a concert in Paris, Bobby tells James about his dream to one day fill a music hall himself.  James takes this as Bobby wanting to quit the band to start his own group and be a copy of James Brown.  This leads to an argument and Bobby does quit the band, but he never starts his own group.  In 1973, after a show, James learns that his son Teddy was killed in a car accident.  This is where James’ drug use begins.

In 1988, James, high on marijuana laced with PCP, accidentally fires a shotgun inside of a mall that he owns.  The resulting police chase makes national news, and James is sent back to prison.  In 1993, James is out of prison and clean and sober.  He meets Bobby for the first time since Teddy’s funeral and tries to make up with him.  He even gives Bobby tickets to his show that night.  Bobby and Vicki do go, and James sees them in the audience.  He opens the show with “Try Me (I Need You)”, which moves Bobby to tears, and they do make up.

The movie ends with title cards saying that James Brown, the Godfather of Soul, is the most sampled artist of all time.  James continued to tour into his 70s, often with Bobby.  James Brown died on Christmas Day 2006.  During the credits, the real James Brown is shown in photographs, many of which were recreated in the movie. 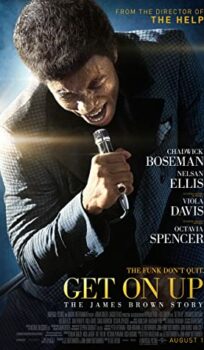