After a brutal shooting, Marcus (50 Cent) tries to live his life out a rapper, with his best friend Bamma (Terrence Howard) as a manager. Majestic, Marcus’s boss, ordered the shooting of Marcus but doesn’t do anything about it.

Marcus makes his underground tape and becomes a hit, even without a contract.

Before his concert, Majestic comes up to Marcus and tells him to give him a hug. Marcus does so, but Majestic says that he killed Marcus’s mother. Marcus flips out and beats Majestic nearly to death. Marcus turns around with Bamma and heads out to the stage. Majestic darts for Marcus with a knife, but Bamma turns around and shoots Majestic once, bringing him down. Marcus walks out the door to the stage and hears four more shots. We then see Bamma unloading some more into Majestic, killing him.

Marcus walks on to the stage and starts to rap. 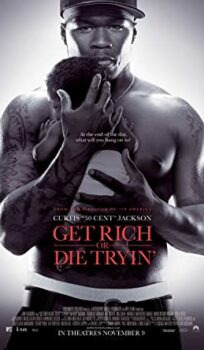