One night, after Elliot (Bill Cosby) has a bit of a blowup with Diane (Kimberly Russell), Danny (Salim Grant), and Amanda (Brooke Fontaine) over how he hasn’t been that good of a father lately, he notices that he is beginning to “flicker” (as the paranormal researcher Sir Edith [Ian Bannen] put it), signifying that his spiritual state is nearing its end and he will be crossing over to the afterlife soon. The next day, Danny goes to school to do his “Trunk of Doom” magic trick for his class’ Career Day despite lacking a kit Elliot needed to get for him so he could perform it properly, and Elliot goes to a meeting at Collins Import & Export Ltd. so he can finally complete its merger with Mr. Nero’s (George Ganz) company and obtain his promotion as well as a new life insurance policy so his kids will be looked after once he is finally gone.

While the meeting is in progress, Diane calls up Elliot to discuss what Danny is about to do out of concern for his safety, but Elliot seems like he only wants to see the merger get finalized. Meanwhile, Danny gets straitjacketed, chained, and locked up in his trunk, but he soon botches the whole act and asks for his teacher to fetch the janitor for him. Thankfully, Elliot suddenly appears and makes the trunk levitate, having left the meeting because he understood that helping his son was more important. He then makes the trunk float around the classroom before getting Danny out of his bindings and making him float out, ensuring him an “A” grade, and Diane enters the room as the act is ending and smiles, pleased that her father did this for Danny. Unfortunately, when Elliot returns to the office afterwards, Mr. Collins (Barry Corbin) yells at him for leaving the meeting and forcing him to close the deal himself, then fires him.

When Elliot returns home, his girlfriend and neighbor Joan (Denise Nicholas) shows him from her front porch that she is ready to go to the banquet Collins Ltd. is holding to celebrate the merger, but he tells her that he just had the worst moment of his life and he can’t talk to her right now. He then goes inside and tells his kids about how he lost his job before flickering in front of them for the first time, and he deeply apologizes for losing it and especially for having to leave them so soon in their lives. Joan then comes in and demands for Elliot to explain why he has been acting so peculiar these last few days, and after Diane heads upstairs out of a dislike for Joan, Elliot tells her that he is dead and is now a ghost, then shows her by briefly turning on the lights and disappearing. Sir Edith then suddenly enters, having managed to track Elliot down, and he informs Elliot that he discovered that he is actually NOT dead; when he and the Satanist cab driver Burch (Raynor Scheine) went over the bridge into the river, he was so badly frightened by the ordeal that his spirit jumped out of his body. Therefore, he is still alive somewhere – for now. In an effort to locate his body, Elliot calls the police while Joan calls the hospital and the cab companies, but the police have no information, and the only thing Joan finds out is that Burch is lying in a coma at the hospital. Elliot comes to believe that his body is lying somewhere on the riverbank, so he makes ready to leave with Edith, Joan, and the kids to go find it. However, Diane trips on Amanda’s roller skates as she comes down the stairs, causing her to take a nasty spill and get rendered injured and unconscious. The group calls an ambulance for her and get her taken to the hospital, with them following behind in Elliot’s car.

As Elliot is watching over Diane in the E.R. as she receives medical attention, she suddenly appears before him in spirit form. Elliot orders her to return to her body, but she refuses, for she has already grown fond of her new abilities as a spirit and has no desire to go back to her regular life. Elliot then flickers again as he tells her that life is all there is and she must not waste it, then he suffers a great loss of strength and falls to the floor. Now worried, Diane tells him that she will help him find his body, but he replies that he isn’t doing anything until she returns to hers, stating that she must live and that he loves her. In a panic, Diane steps into the I.C.U. while vainly calling for help, and there she finds her father’s body lying comatose on one of the beds. She brings Elliot inside and shows him, and the name at the foot of the bed reads “Curtis Burch”, indicating that the police found Burch’s I.D. and thought that he was him (Burch had taken his wallet just before the cab fell into the river). Diane promises to go back into her body if he gets into his, so he enters it, and he awakens moments later. Diane returns to her body, regains consciousness, and leaves the E.R. while Elliot walks on out of the I.C.U., and they and the others happily reunite in the hallway, all to the astonishment of the hospital’s staff.

After Elliot and company exit the hospital, Elliot notices a taxi parked nearby, so he goes up to it and finds that Burch is driving it. Since he told Burch that he was Satan and he believed it, Burch is delighted to see him, and he gives him back his wallet. Burch then wants to know from Elliott what he commands of him, so Elliot tells him to go to Hell and sit on a red-hot coal and wait for him until it snows. Burch gleefully drives away, and Elliot, Joan, the kids, and Edith pile into Elliot’s car and head back home. 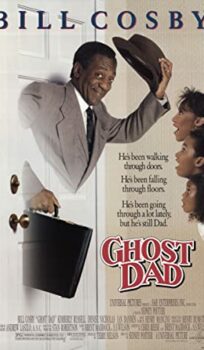