The Mongols, led by Khotun Khan, invade Tsushima Island, slaughtering nearly every samurai. One survivor, Jin Sakai, must rescue his uncle and mentor, Lord Shimura, from Khotun’s forces. He teams up with a number of allies, including a thief named Yuna, her brother Taka, master archer Sensei Ishikawa, skilled swordswoman Lady Masako Adachi, and the monk Norio. He also attempts to get help from the Straw Hat ronin and their leader, Ryuzo, but when they storm Khotun’s stronghold at Castle Kaneda, Ryuzo betrays Jin to get the bounty on his head so he may feed his men. Jin defeats him in a duel and rescues Shimura, but Khotun now has the Straw Hats by his side and advances forward.

Throughout his journey, Jin faces off against many Mongols and liberates many villages and settlements, earning him the name, “The Ghost.” When trying to reclaim Castle Shimura, the heroes start off well against Khotun’s forces until the Khan resorts to more fiendish tactics, resulting in the deaths of many of Jin’s allies. Knowing that they cannot risk losing more men, Jin sneaks into the Mongol camp with some poison he was taught to make, and he kills many Mongols with it before fighting Ryuzo again and killing him. Although Khotun’s forces have been brought down further, Shimura and the Shogunate are displeased with Jin’s methods of killing the Mongols, as they go against the samurai code. He is imprisoned but later escapes.

After gathering more allies and rallying the residents of Tsushima, Jin and his team storm Khotun’s final stronghold and reach the vicious leader himself. Jin and Khotun battle on his ship until Jin impales and beheads him.

With the Mongol forces dying down, Jin meets with Lord Shimura, only to learn that the Shogunate has ordered Jin’s execution for his tactics and going against their code. Jin duels Shimura and ultimately defeats him. Regardless of what choice he makes (whether or not to kill Shimura honorably), Jin must now go on the run for the rest of his life. 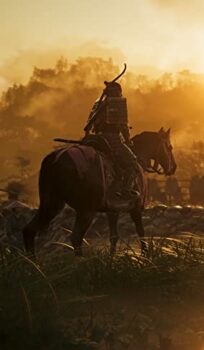