As a teenage, Johnny Blaze sells his soul to Mephistopheles, the Devil (Peter Fonda) so that his father’s cancer will be cured.  Mephistopheles does cure the cancer but Johnny’s dad is killed in a motorcycle accident the next day leaving Johnny heartbroken.

Years later, Johnny (Nicholas Cage) is a famous motorcycle daredevil and is reunited with his longtime love Roxy (Eva Mendes) when she interviews him before his biggest stunt jump.  However, that night when Johnny and Roxy are to meet for dinner, Mephistopheles calls on Johnny to honor their pact and become a ghost rider, a vigilante type who claims the evil souls of those who escaped from hell for Mephistopheles.  However, Johnny’s assignment is to prevent the Mephistopheles’ son, Blackheart (Wes Bentley) and his band of souless meanies, from finding an ancient contract that holds the names of 1,000 lost souls.

Mephistopheles shows up after Blackheart is killed to release Johnny’s soul but Johnny tells Mephistopheles he will keep this power and use it to protect the innocent and punish Mephistopheles.  Enraged, Mephistopheles pretty much declares war on Johnny.  Johnny and Roxy part ways so that Johnny can fulfill his ghost rider duties and bring down the wicked (this leaves a huge opening for a sequel). 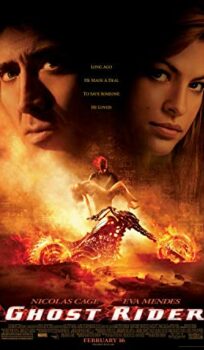