SHORT VERSION: Brian figures out that Westpac Medical Supply is secretly shipping weapons, not medical supplies, to the Vietnamese Anti-Communist Relief Fund, and reasons that Vinh was killed by Lawndale, Trac, and Bobby because he had found out about them (which was largely true. Vinh ALMOST found out about them, and Bobby killed him by accident while he and Lawndale were interrogating him over what he had discovered. Trac showed up at the tail end of the interrogation and witnessed Vinh’s death).

A few days after the murder, Lawndale accidentally kills Bobby while having a heated argument with him and Trac. Much later, everything comes to a head at Trac’s house. Guilt-ridden over all of the blood on their hands, Trac tells Lawndale that he is fleeing to Bangkok with his family, but Lawndale – unwilling to take the fall for their crimes all by himself – draws out a gun and takes his daughter Tina hostage just as Detective Lucero arrives outside the front of the house to question Trac and Brian sneaks in through the backyard. Trac tries to wrest the gun from Lawndale’s grip, but ends up getting fatally shot, and Lawndale manages to escape with Tina in Lucero’s car. Brian and Lucero immediately pursue Lawndale in one of Trac’s cars, resulting in a long car (and skateboard) chase with him through the city.

In the end, Lawndale crashes his car, Brian knocks him out with a mid-air skateboard attack, and Lucero arrests him. Brian goes steady with Tina, and he and Lucero become firm friends.

LONG VERSION:
Brian (Christian Slater) breaks into Westpac Medical Supply one night and snoops through their warehouse, and discovers that Lawndale (Richard Herd) and Trac (Le Tuan) are secretly shipping weapons, not medical supplies, to the Vietnamese Anti-Communist Relief Fund. He reasons that they and Bobby (Peter Kwong) had killed Vinh (Art Chudabala) because he had found out about their operation (which was largely true. Vinh ALMOST found out, and Bobby had killed him by accident while he and Lawndale were interrogating him over what he had discovered. Trac showed up at the tail end of the interrogation and saw Vinh’s body. A few days later, Bobby would end up getting accidentally killed by Lawndale while having a heated argument with him and Trac, which Brian witnessed).

To shake up Lawndale and Trac, Brian sneaks back into WMS’ property the following night and blows up their big propane tank outside with a petrol bomb. Later on, Detective Lucero (Steven Bauer) pays him a visit at his home, where he angrily tells him that, though he can’t pin that explosion on him right now, he knows he did it, and thus was no longer going to listen to him. In the early morning hours, Trac’s daughter Tina (Min Luong) – whom he had begun dating so he could find out more about Trac but also had grown to care about – shows up outside his bedroom window, and after he lets her in, she tells him that her father is in some kind of trouble and it is really scaring her.

She stays the night, and as she is about to leave the next morning, she sees her father’s special lighter that Brian had stolen from his house resting on a table. Brian decides to come clean with her and tells her everything he knows regarding Vinh’s death, and she then goes home and confronts her father about it, saying that Brian had enlightened her to it all. He confesses that he knows about Vinh’s death and how it was an accident, and afterwards, he privately telephones Lawndale and alerts him to the fact of how Brian knows the truth. Lawndale is keen on killing Brian, but Trac isn’t, already guilt-ridden over all of the blood on their hands.

Lawndale sends three of his thugs after Brian. They find him, but in the subsequent chase, they all cross paths with a cop car, and two of the thugs are arrested while the third escapes. Brian is also taken to the police station, and Lucero questions him about the chase, but all he tells him is that the thugs had said that Lawndale wanted to “see him.” When Lucero asks him if he is ready to talk about what happened at WMS, he initially still won’t confess to having committed the act, but in the end decides to own up to it. After getting his things from the processing department, his parents take him home.

That night, while his parents are asleep, Brian packs up all of the new protective skateboard gear his mother had earlier given him and sneaks over to the home of his friend Yabbo (Max Perlich), and he has him construct a custom skateboard for him. Once finished, Brian tells him to call all of their friends, for he is planning an assault on Lawndale and Trac and needs their help. He then heads to Trac’s house alone while Yabbo starts spreading the word. Meanwhile, after an extensive interrogation, Lucero eventually gets the two thugs to admit that Lawndale had sent them after Brian. He then goes to Brian’s home to talk to him, but of course, he’s not there. However, he notices that Brian has left Trac’s lighter out in the open for him to find, and he takes it and drives over to Trac’s house.

Brian gets to the house before Lucero, and as he sneaks into the backyard, he sees Lawndale and Trac arguing inside. Trac plans to flee to Bangkok with his family, but Lawndale is against this, for he does not want to take the fall for their crimes all by himself. Lucero then arrives in front of the house, and when Tina tells her father about the arrival, Lawndale draws out a gun and takes her hostage. Trac tries to wrest the gun from his grip, but ends up getting shot just as Brian comes crashing through the window, and Lawndale escapes with Tina through the back. They head out front, where Lawndale forces Trac’s servant to drive him and Tina away from the scene in Lucero’s car. After Brian calls for an ambulance to come to the house, he and Lucero go after Lawndale in one of Trac’s cars. Lucero puts in a call on the car’s phone requesting backup, and then Brian calls his friends to let them know that the chase is on. The chase proves to be a long one, with Brian’s friends, the police, and a motorist Lawndale hits that Brian piggybacks a ride from all taking part in it.

Eventually, Lawndale’s car crashes along a freeway, and he takes Tina and attempts to flee on foot, but he soon finds himself in a shootout with Lucero. Brian comes in piggybacking on his friends’ truck, and the driver Buddy (Tony Hawk) slams on the brakes, sending Brian flying over the freeway wall towards Lawndale. While airborne, he smacks his board in Lawndale’s face, knocking him out. Brian crash-lands on the opposite freeway, sustaining a broken wrist, and Lucero puts the cuffs on Lawndale.

Some time later, Tina visits Brian in the hospital. When he inquires about her father, she remains silent, indicating that he has died from his wound. He asks her what she will do now, and she says that her mother wants to stay in town, but she feels unsure about going back to school and facing everyone after all that has happened. Brian tells her to not go back until he gets out, and then they’ll both go back together. It is implied that they will officially go steady.

Some time later, Brian visits Vinh’s grave and pays tribute to him, now that he has avenged his murder, and Lucero is with him. Lucero asks him how things are at home, and he replies that his relationship with his parents has gotten better. The two then drive off together. 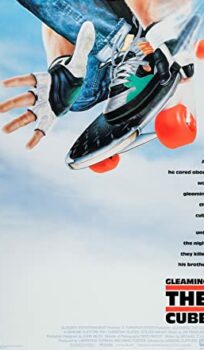