Gloria (Sharon Stone) arranges for Nicky (Jean-Luke Figueroa) to attend an all-boys Catholic school located upstate to keep him safe from Kevin (Jeremy Northam) and his thugs, but after making the arrangement, Kevin’s thugs find them. Gloria and Nicky try to run, but Nicky is soon caught and taken to Kevin. He searches him for his father’s incriminating disk, but he finds nothing, indicating that Gloria has it.

Gloria decides to visit Ruby (George C. Scott), the boss of the mob, knowing that because he likes her and because he outranks Kevin that he would be able to get Nicky back safely to her. She tells him that Nicky has no knowledge about what the disk contains and that he doesn’t deserve to get killed, and she will gladly trade him the disk in exchange for Kevin returning Nicky to her, and then they’ll both disappear. He agrees to the deal, and also, Gloria makes him promise that he will come with Kevin to ensure that he returns Nicky to her.

Later on, Gloria meets with Kevin and Ruby, and Gloria gives Kevin the disk and gets Nicky back unharmed. As Gloria and Nicky walk away, Kevin gives the disk to Ruby, who is clearly disappointed with him for wanting to harm Gloria and a kid. At a hotel that night, Gloria tells Nicky that, if he wanted her to, she could be his mother.

She drives him to the Catholic school the next day, and though she tries to look tough when saying goodbye, she is clearly fighting back tears. As she is leaving the grounds, she decides that she has come to care about Nicky too much to give him up, and heads back. She finds him and hugs him, then asks if he likes the school, and he replies that he doesn’t. She tells him that she would feel better if he stayed with her, and he agrees to do so. She then gets him in her car and makes him keep his head down so the school’s staff won’t see her leaving with him, and then they head to the airport and take off to Miami so she can meet her parole officer on time (and so they can start a new life). 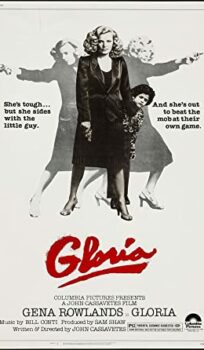