Long Ending:
Ellis Whitman (Graham Phillips) is a 15-year old who has been raised primarily by his hippie/emotionally unstable/new-age mother Wendy (Vera Farmiga) in Tucson, Arizona. Due to his mother’s loopiness, Ellis has had to take responsibility for much of the household chores and paying the bills from Wendy’s trust account. His father, Frank (Ty Burrell), is divorced and hated by Wendy. Frank lives in Washington, D.C. He sends Ellis lavish gifts and letters, but hasn’t been to visit in years.

Ellis has therefore bonded mainly with “Javier” (David Duchovny) who prefers to go by the name “Goat Man” (but who is actually named Sean). Goat Man is a botanist and goat farmer who lives in Wendy’s pool house and helps maintain the yard. He also grows a ton of weed and has been sharing the drugs with Ellis since the latter was 11. The two go on treks into the wilderness with their pet goats.

Ellis decides to secretly apply to the prep school his father had attended. The prep school is on the East Coast, and though Goat Man and Wendy disapprove, Ellis decides to enroll. Ellis goes off to school and is dismayed that he never hears from his mother (who simply can’t handle Ellis becoming more “like his father”) or Goat Man (although Goat Man unsuccessfully attempts to send Ellis pot in the mail on several occasions). Ellis strikes up a friendship with his dorky roommate Barney (Nicholas Lobue) who also lives in D.C. Ellis also develops a crush on one of the school’s employee named Minnie (Dakota Johnson). The rumor is that Minnie prostitutes herself to the upper-classmen, but Ellis refuses to believe it and also finds out that she is covertly using the school library to read classic novels.

Unable to keep things together without Ellis, Wendy begins dating a jerk (with homosexual tendencies) named Bennet (Justin Kirk). After awhile, Bennet begins to ask Wendy (unsuccessfully) to evict Goat Man, and he also treats Goat Man like a servant. Meanwhile, Goat Man begins sleeping with a girl who is less than half his age and also used to bully Ellis. Over fall break, Ellis agrees to visit his father in D.C. He finds that Frank has married a woman named Judy (Keri Russell) and that Judy is pregnant with Ellis’ future half-brother. While together, Frank blames Wendy for him staying out of Ellis’ life and also disapproves of Ellis’ use of pot and alcohol. Though things are awkward, Ellis does bond with Judy. They invite him to spend the summer with them so that he can meet his half-brother, who will be born by then.

When Ellis later returns home for winter break and is disgusted by Bennet and disappointed at Goat Man’s affair. He and Goat Man go on a trek to Mexico, where Ellis later discovers that Goat Man is smuggling cocaine for a drug lord. Goat Man says he is scared that he will be evicted and knows no other way to make money. The two get into an argument and Goat Man runs into the desert, completely abandoning Ellis in the wild. Ellis is eventually picked up by his mother and they also argue, with Ellis telling her that Frank is remarried and will soon be a father to another child. When Ellis returns to school, he is on bad terms with his mother and Goat Man is still missing.

To Ellis’ surprise, Frank flies out to visit him in school. Frank apologizes for not being there for Ellis and this time, takes full responsibility for abandoning him. The two genuinely grow closer. Ellis also is asked out by Minnie, but she reveals she is, in fact, a prostitute. Ellis turns down her offer. Meanwhile, Wendy finally dumps Bennet and begins seeing a shaman who helps her with her anger and depression.

Goat Man finally returns from the desert, safe and sound (and finally manages to successfully mail some pot to Ellis). Ellis returns home after the school year and makes up with his mother. He and Goat Man go on a trek, and Goat man says he will no longer attempt to smuggle drugs (and suggests he will also seriously re-devote himself to scientific work). Ellis says he plans to visit his father, step-mom and half-brother and Goat Man supports the decision (this is literally how the movie ends). 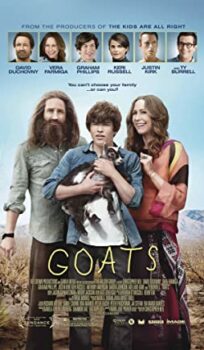