After the events of The Return of Godzilla (or Godzilla 1985 american version) two rival companies get their hands on several of the Godzilla cells.

Several years later Genichiro Shiragami (Koji Takahasi) is being watched by a company called Bio Major and a fictional country who are after the cells.  Shiragami combines the DNA of godzilla and that of roses.

Bio Major’s thugs and a hired professional assassin come to blows over the cells in Shiragami lab. Though the mixture of the Godzilla cells and the roses have mutated to form a creature called Biollante.

Bio Major, by means of blackmail, accidentally gets Godzilla released Mt. Mihara only for Biollante to call out Godzilla.

Biollante and Godzilla have their first battle in which Godzilla winds handily.

Godzilla sensing nuclear energy heads to Osaka which throws off the Japan Self Defense Force which though it was headed towards Tsuruga. All the meanwhile they had a plan of using microwaving heating plates to which they hope to slow down Godzilla.

While the microwaving heating plates work for a while Biollante spores into a film form that looks like Godzilla. After a fierce battle Godzilla wins but collapses.

Shiragami is then shot by the assassin who then killed by the microwave emitters. Godzilla then rises and swim out into the ocean. 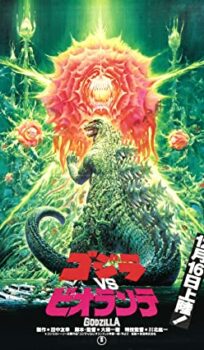