SHORT VERSION:
Sun Yi and his cult try to hypnotize John into killing his soon-to-be father-in-law Ed Reese at his wedding to Nancy, but at the moment of truth, the hypnosis spell proves to have been ineffective when John points the gun the cult gave him in the direction of the cultists. They try to flee, but are halted by Sal and his film crew, and they are later arrested.

John marries Nancy and receives much praise for saving Ed’s life, and Ed rewards him by agreeing to fund a limousine franchise for him and Chick anywhere that he and Nancy want to set it up at, and he and Nancy settle on Africa. John is worshipped like a king to a tribe of Africans who presumably work for him, but he is rather lax with them. Also, despite initially despising Sal for being blackmailed by him into letting him film the wedding, Ed rewards Sal for his aid by hiring him as his campaign manager for his upcoming U.S. presidential campaign.

LONG VERSION:
Sun Yi (Richard Libertini) and his cult lure John (John Candy) to their aerobics studio under the pretense of needing his limousine service to go somewhere, and they proceed to hypnotize him into performing an assassination mission on his soon-to-be father-in-law Ed Reese (Pat Hingle), an enemy of theirs who is crusading to end them. They tell him that he will perform the assassination at his wedding rehearsal with Nancy (Alley Mills) tomorrow, and his cue to act will be when someone shows him a playing card containing the five of spades. However, they soon find out that their hypnosis was done imperfectly when it results in the magnification of his most juvenile traits and causes him to act like a jerk, and they worry that he may not kill Reese when he sees the playing card.

At the rehearsal, Patti (Ann Bronston) – Nancy’s younger sister who hates her whole family and is secretly one of Sun Yi’s followers – shows John the playing card as planned, but his juvenile behavior comes out in full force and negates his command to kill. His friend Chick (Joe Flaherty) later takes him to a psychiatrist, who analyzes him and eventually determines that his mind has been placed under post-hypnotic suggestion, so he subjects him to some fear therapy in an attempt to fix his mind. John later meets up with Nancy at a restaurant to apologize for his actions and lies about why he behaved the way he did, thinking that she wouldn’t believe he had been hypnotized. However, after he sees another five of spades and acts very rudely again (proving that the therapy failed to work), he confesses the truth about his altered mind to her. Thankfully for him, she believes him.

Chick drops off John at his apartment building, but Patti and some of the cult members show up right after and force John back to the aerobics studio so they can reprogram him. This time, their hypnosis attempt appears to be successful, and they give him a gun and instruct him to pull it out at the wedding and kill Ed with it when he hears the minister say “with this ring, I thee wed.” Having seen the cult abduct him, Chick shows up at the studio in the midst of this and tries to find John, but the cult’s muscle seizes him and end up taking him down to the harbor, where they cast him into it as a means of murdering him (though they fail).

As the guests start filing into the church for the wedding, Sun Yi and his top followers Angela (Dixie Carter), Clarence (Kurtwood Smith), and Bruno (Ronald E. House) are shown to be present, wanting to see the assassination first-hand, but Angela warns Sun Yi that the hypnosis spell has been known to wear off under pressure. John is seen staring off into space most of the time, seemingly waiting to execute his command. After the minister says the vow, John pulls out his gun, but he ends up pointing it at the cultists just as Chick shows up and tries to get the gun away from him. The cultists try to flee, but John orders Sal (Eugene Levy) and his crew filming the wedding to keep them from doing so, and then he tells Chick that the cult wanted him to kill Ed and tried to hypnotize him to achieve this, but they failed completely.

In a later newspaper article, John is publicly praised for saving Ed’s life and also weds Nancy, and Sun Yi is arrested along with his entire cult. Despite having initially treated Sal with disgust and scorn, especially since he blackmailed him into letting him film the wedding, Ed makes him his campaign manager for his upcoming U.S. presidential campaign as a reward for his actions in stopping the cultists. As a show of gratitude for John’s heroism, Ed establishes private funding to help set up a limousine franchise for John and Chick anywhere that John and Nancy choose to have it set up at, and they ultimately settle upon Africa. As shown at the start of the film, John is worshipped like a king to a tribe of Africans who presumably work for him, but he is rather lax with them. 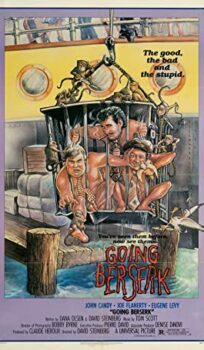