SHORT VERSION:
Gil ends up quitting the Omegas’ pledge class when Thompson and Davis confront him in private and tell him that he was only accepted into the class because Jake agreed to pledge, which Jake hears and then confirms to Gil that that was indeed why he joined. Jake then gets into a brief brawl with Thompson and Davis before the other frat brothers enter and break it up. Jake then talks with the president Brad and finds out that he and the rest of the frat consider Gil worthy of being a member, so he asks him why Gil wasn’t bid for induction in the first place. He then learns that Gil was bidden, and realizes that Thompson and Davis lied to him and Gil in order to get back at them for making them look like punks in a confrontation they had in the campus cafeteria before they had first pledged, and he informs Brad about this.

Jake relays his news to Gil as well as the other pledges, and after some thought, they decide that – apart from Thompson and Davis – the fraternity as a whole is cool with them, so they help them achieve victory in their flag football game against the Kappa Phi fraternity, saving them from losing their house to the Kappas. Jake, Gil, and the other pledges are made full fraternity members, and after that, the guys help Jake rekindle his relationship with Paige, which had earlier fallen apart due to her hatred of fraternities. Thompson and Davis get demoted back to pledges and are shipped to the frat’s Alabama State University chapter to undergo the trials again, but this time, the trials look to be more painful than what they dealt with before.

LONG VERSION:
Jake’s (Dylan Bruno) burgeoning relationship with Paige (Laura Harris) ends up falling apart because she hates all fraternities and thus can’t deal with him pledging to Iota Chi Omega (whom she particularly despises because she used to date Thompson [Simon Rex] and the relationship ended due to him cheating on her during a particular prank that the Omegas liked to pull on women). As Jake, Gil (Dublin James), and their fellow pledges are practicing with pledge master Sullivan (Corey Pearson) and some other Omega members for the frat’s annual flag football game against the Kappa Phi fraternity, Gil flubs up on a pass and gets forced to do squats by his nemesis Davis (Chris Owen) as punishment. Sullivan then tells the other pledges that this game is very important, but it is not solely because the winners get $5,000 for a celebration party and 100 kegs of beer. He explains that the Omegas have lost the last two games to Kappa Phi, and if they lose this game, they will have to trade houses with the Kappas, which is bad news because the Kappas’ house burned down last year and they have been living in the dormitory since then.

Back at the Omega house later on, Thompson and Davis confront Gil and tell him that they and the other frat brothers think that he is a loser, and even if he does make it through pledging, he will never be accepted as an Omega. Gil refuses to believe this, so the duo inform him that the only reason he got accepted into the pledge class was because Jake agreed to pledge, and they wanted Jake because they felt his football skills would increase their chances of winning the upcoming game. Around that moment, Jake walks in, and when asked by Gil if that is the truth, he nods, so Gil quits the house and leaves. Jake then brawls with the duo, but it is quickly ended when Sullivan, the president Brad (Branton Boxer), and the other frat members enter and separate them.

Brad orders Sullivan to get everyone to the field since the game starts in an hour, and after privately speaking with Thompson and Davis, he talks to Jake. He tells Jake that the duo have admitted to hazing Gil, but they claim that Gil had quit due to feeling guilty over the earlier fumbled pass. Jake replies that that is bogus and reminds Brad that Gil has suffered the pledge trials for the last three months without complaining once, and he states that Gil deserves to be in the frat more than anybody. When Brad agrees with him, Jake asks why Gil wasn’t bid for induction into the pledge class in the first place. Off-screen, Brad reveals that the frat actually did select Gil for induction, and Jake explains to him that Thompson and Davis lied to him and Gil about that, undoubtedly as a means of getting revenge on them for making them look like punks in a confrontation they had in the campus cafeteria before they had first pledged.

Jake then goes to the dorm room he shares with Gil and finds him preparing to move out, and he apologizes for his silence but tells him how he discovered that Thompson and Davis had misled them. Gil vents about how all he ever wanted was to be one of the guys, and he thought that that was what this whole thing was supposed to be about, but he was wrong. Jake asks about himself and the rest of the pledge class and the “all or nothing” pact they made, and Gil yells that, if he meant anything to the others, they’d be here now instead of playing the football game. Jake opens the blinds and shows him that their fellow pledges are standing outside waiting for them.

They all soon get to discussing about whether or not to no-show the game and then drop out of the pledge class, agreeing that the frat needs them more than they need the frat. Jake says that, while he will walk out with them if they decide to do so, he has no problem with the Omegas apart from Thompson and Davis, and all of the hardships they have endured will have been a waste of time if they quit now. In the end, everyone unanimously votes to help the frat win the game. They make it to the field as the frat is getting creamed by the Kappas, and they help close the gap on the scoreboard until the Omegas are just a few points away from victory. Jake encourages the Omegas to let Gil score the winning touchdown, so they snap the ball to him and he throws it to Gil, who manages to catch and hold onto it past the goal line when the Kappas pile onto him, giving the Omegas the victory.

A day or two later, Jake, Gil, and the rest of the pledges become full fraternity members. At the celebration party, Gil and the others find Jake sitting outside looking forlorn, and Gil quickly deduces that he is thinking about how he lost Paige. He and the other guys decide to help Jake win her back by arranging for Paige to meet him for a romantic dinner that night. Paige praises Jake for letting Gil win the game, and after some further chitchat, they share a kiss and rekindle their romance. The gang later returns to the shindig, and Jake finds out that Gil’s never-before-seen model girlfriend is real when she comes up to Gil and kisses him and then shows him her new “Property of Gil Sherman” tattoo.

Jake and Gil then converse with Brad and the rush chairman Rigby (Britain Spellings), and Brad apologizes to them for the actions of Thompson and Davis. After having noticed that they have been absent since before the football game started, Jake asks where they are, and Rigby replies that the frat has sent them to one of their southern chapters via Fed Ex. We then see the duo being unpacked at the Alabama State University’s chapter, and we discover that they have been demoted back to pledges and were sent there to be re-initiated. However, it is implied that these trials will be more painful than what they dealt with before, after we see the leader readying a branding iron inscribed with the frat’s letters. 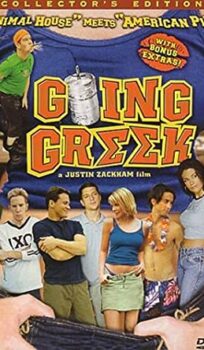