Patrick Kenzie (Casey Affleck) discovers that the missing girl has been taken by Police chief Jack Doyle (Morgan Freeman), who is raising her with his wife. The child was taken in a conspiracy involving Doyle and the child’s uncle. Kenzie debates with his partner/girlfriend Angela Gennaro (Michelle Monaghan) about whether to alert the authorities to this. Against her wishes, he does so and the child is returned to her mother. As a result, she ends their relationship and partnership. 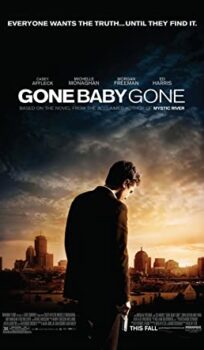