Brothers Connie and Nicky (Robert Pattinson and Benny Safdie) rob a bank, only to lose the money after a dye pack goes off. Nicky is arrested after splitting from Connie.

Connie tries to round up some money to get his brother out. He finds out Nicky got into a fight in jail and is hospitalized. Connie goes to break him out, but he ends up getting another inmate named Ray. Ray (Buddy Duress) informs Connie that he hid a bottle of LSD worth a lot of money in an amusement park with some other stolen money. The guys try to find the stuff, but only get the LSD.

Nicky is later released from prison after Connie presumably took the fall for him. 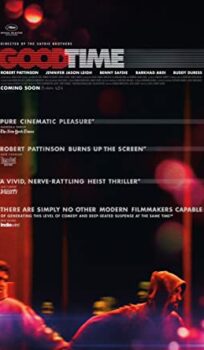