Jonathan Moore (Anthony Edwards) is a UCLA veterinary student who also plays Gotcha!, a popular assassin game that has students shoot each other with paintguns. His expertise with guns and hiding make him the best at the game. He and his roommate Manolo travel to Paris for Spring Break to enjoy the sites and to get laid.

Once in Berlin, Sasha tells him that the business is in East Berlin. Posing as tourists, they go to East Berlin and she leaves him to “do her business.” The business is to smuggle some film out of the country. Before they split up, she gives Jonathan a code message that, if he ever hears her say, he is to leave Berlin immediately and go home. With her business completed, she sneaks the film into his backpack and they head back to West Berlin. On the way, Sasha sees Soviet spies following her, gives Jonathan the code message, and runs away. She is caught, while Jonathan crosses over before he can be stopped. The spies don’t find the film on Sasha, so they follow Jonathan into West Berlin and eventually back to Los Angeles.

Now back in LA, Jonathan goes to his apartment, only to see three men leave it. He goes in and sees it in shambles. Thinking the three men were Soviet spies, he calls the CIA for help, and they bring him in. When he arrives at the CIA office in LA, he sees Sasha and the three men who trashed his place and quickly leaves. Sasha eventually gets in contact with him and they meet on the UCLA campus. There, she admits that she is not a Czech named Sasha, but a CIA agent named Cheryl. They noticed his prowess at Gotcha and used him for her mission to East Berlin. At this time, the Soviet spies show up and start shooting at them. They run to the veterinary building and get a tranquilizer gun. Now Jonathan is playing Gotcha with the spies, but this time with real guns. He is able to tranquilize the spies and saves Sasha/Cheryl’s life. Now safe, Jonathan hands over the film to the CIA and wants to go back to his college life. Before leaving, Sasha/Cheryl tells Jonathan that she was sorry for using him, and she’s in love with him too. They kiss as the movie ends. 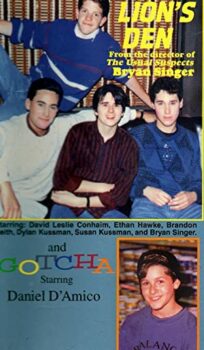