By dumb luck,  Ciarán O’Shea (Richard Coyle),  Lisa Nolan (Ruth Bradley), Paddy (Lalor Roddy) and Dr. Smith (Russell Tovey) figure out alcohol intoxication makes them poisonous to the monsters that have begun to show up on Erin Island, nicknamed “Grabbers.” With a storm brewing that will allow the large male Grabber to come onto land (as Grabbers live off blood and water), the four organize a free party at the local pub to keep the islanders safe.

Despite their precautions, Dr. Jim Gleeson (Pascal Scott) is eaten when he ventures outside. Also, a drunken Dr. Smith gets right up next to the male Grabber thinking his intoxication makes him safe; the creature responds by throwing him high into the air to his death.

With the creature beginning to attack the pub and everyone in it, O’Shea and Nolan lure it to nearby construction site. O’Shea poisons the Grabber with Paddy’s moonshine, while Nolan uses a flare gun to ignite some fuel cans, incinerating the monster.

O’Shea and Nolan then walk back into town. O’Shea throws away his flask and pledges to stop drinking (he became an alcoholic after his wife left him). O’Shea and Nolan give in to their mutual attraction and kiss and it is implied that Nolan will stay on the island to continue the relationship.

The film ends with a shot of the beach, near where they first found the male Grabber. There were eggs on the sand, waiting to hatch. Paddy saw them but the group forgot about them in their panic to escape the male Grabber. Just before the credits roll, one begins to shake… 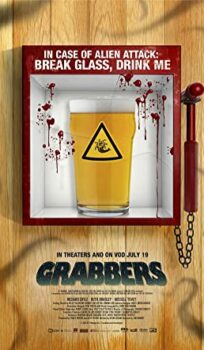