In 1956, Jerry Lee Lewis (Dennis Quaid) comes to Memphis to live with his cousin J.W. (John Doe) and his family, and to start a rock and roll band.  Since he plays the piano instead of the guitar, nobody thinks he will become as popular as current rock star Elvis Presley.  After a successful audition with Sun Records, he signs with them and they release his song “Crazy Arms”.  It’s an immediate hit, and Sun would later release “Whole Lotta Shakin’ Goin’ On” and “Great Balls of Fire!”.  All three songs go to the top of the charts, and people are beginning to think he could replace Elvis as the King of Rock and Roll, since he just joined the Army.  At this time, the 23-year-old Jerry Lee begins to catch the eye of J.W.’s 13-year-old daughter Myra (Winona Ryder).

Despite the age difference, the two fall in love.  One day, Jerry Lee picks up Myra from school and drives her across the border to Mississippi to get married.  The next day, J.W. learns of the marriage and goes to the Sun Records studio looking for Jerry Lee.  Sam Phillips (Trey Wilson), the head of Sun Records, diffuses the situation and convinces everyone to keep the relationship a secret from the public.  It’s at this time that Sun Records wants to send Jerry Lee to England for a concert tour, but Myra should stay at home.  Jerry Lee insists that she go with and, if anyone asks, they will say she is 15.  Once Jerry Lee and Myra arrive in England, the media quickly learn that she is his cousin and actually 13 years old.  The English public, who had given them a huge welcome just days earlier, are now calling him a child molester and a pervert.  The tour is a disaster, and is canceled after just a few performances.

Upon returning to the US, his American fans have turned on him as well.  His latest hit “High School Confidential” quickly falls off of the charts, and he can only get booked at shows with sparse crowds.  Myra blames herself for ruining Jerry Lee’s career, and wishes that they never married.  Jerry Lee, who has started to drink heavily and beat Myra, insists that his career will continue.  The movie ends with Myra telling Jerry Lee she is pregnant, and he promises to be a good husband and father from now on.  A title card reads, “Jerry Lee Lewis is playing his heart out somewhere in America tonight.” 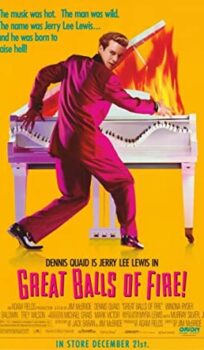