After being the usual pain in the ass, especially to his co-workers Rita and Larry, a blizzard (that he failed to forecast) forces him to spend another night at his Punxsatawney bed & breakfast. He awakens next morning to find that it is Groundhog Day, again, and again, and again….apparently he is doomed to repeat this day forever.

Exhausted after endlessly spending the same day over and over in debauchery, seduction, and eventual ineffective suicide attempts, Phil changes. Every day he befriends a elderly dying homeless man, catches a boy falling from a tree, performs a lifesaving Heimlich Maneuver, encourages a soon-to-be-married couple having cold feet, etc.

During his busy day he learns to play the piano and ice sculpt, and falls in love with Rita.

One day, Rita, dazzled by the change in Phil,’buys’ him for the evening in the fund-raising batchelor auction. That evening she sees the change in Phil and learns of his love for her; they eventually fall asleep in Phil’s bed without “doing anything”. He has finally lived the day perfectly; he wakes up on the day AFTER Groundhog Day with Rita in his arms. 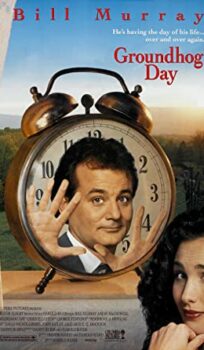