Having grown tired of Gulliver (Jack Black) and having been rejected by Princess Mary (Emily Blunt), General Edward (Chris O’Dowd) defects to the Blefuscians. He tells their king, Leopold (Emmanuel Quatra), that Gulliver has turned Lilliput into his own kingdom, and if he isn’t stopped, he will do the same to Blefuscia. He also says that, to save Lilliput, he must first destroy it. Leopold agrees to help him, and the Blefuscians assist Edward with helping him build a giant robot using schematics that he took from one of Gulliver’s science fiction magazines, with him piloting it.

Edward returns to Lilliput with the Blefuscian forces, and with the robot, he has a duel with Gulliver and wedgies him until he surrenders. The humiliation makes Gulliver admit to the Lilliputians that he lied about a lot of the things he told them about himself. The Blefuscians take over Lilliput, re-name it “New Blefuscia”, imprison King Theodore (Billy Connolly) and Queen Isabelle (Catherine Tate), and make Edward the nation’s commander. Gulliver is banished to Brobdingnag, and upon arriving there, he quickly discovers it to be populated with people that are giants to him, and he ends up as a giant girl’s baby doll.

Darcy (Amanda Peet) – who had to do the assignment on the Bermuda Triangle herself since Gulliver vanished – then ends up on Lilliput and is imprisoned by Edward when he realizes that she is Gulliver’s “one true love.” Horatio (Jason Segel) sees this from afar and secretly journeys to Brobdingnag to warn Gulliver. After finding him and telling him the news, Horatio asks him why he lied, and he replies that he did it because he felt like a big shot for the first time in his life and he didn’t want it to end. Horatio tells him that he doesn’t see Gulliver as some small little thing, and reminds him of how he saved Mary and single-handedly defeated the entire Blefuscian armada, and that he fully believes that he can save Lilliput as well. The two then escape back to Lilliput, and they find Darcy, Theodore, and Isabelle in the dungeon. While talking with Darcy about the situation they’re in, Gulliver finally admits to her that he has had a crush on her for a long time, and he tells her that he can’t leave with her until he has redeemed himself in the eyes of the Lilliputians. After freeing the royals, he asks them if he can be their “glorious protector” again, and they give their blessing.

Gulliver challenges Edward and his robot to another duel, this time with the fate of Lilliput hanging in the balance. After Edward shocks him repeatedly with electrical powers that he had installed in the robot after their previous duel, Gulliver looks to be dead meat, but Horatio manages to get into the robot’s control room, disable the electricity, and escape. This gives Gulliver the opening to gain the upper hand, and he ends up giving the robot a “wedgie” that renders it inoperable.

Horatio goes up to Mary and professes his love for her, and they kiss after he gets Theodore’s permission to court her, since he committed an act of valiance. Edward then tries to kidnap Mary, but – having grown sick and tired of his crap – she easily turns the tables on him and punches him unconscious. Gulliver apologizes to Darcy for plagiarizing his travel writing sample, saying he did it because he was afraid she’d never go out with a mailroom clerk, and she kisses him in response. He then brings peace between Lilliput and Blefuscia by doing a song-and-dance number to the song “War” by Edwin Starr.

Gulliver and Darcy say their goodbyes to the Lilliputians and return to New York. Gulliver becomes a full-fledged travel writer for the newspaper – with his own column called “Gulliver’s Travels” – and he and Darcy start dating. 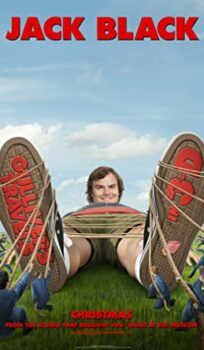