The true intention of Operation Meteor was to drop a colony onto the Earthsphere and have the Gundams control the ensuing chaos it caused so that the Barton Khushrenada family can be the rightful rulers of The Earthsphere as well as the space colones surrounding it. It was thwarted when the 5 Gundam pilots and the scientists that trained them decided to rebel against Dekim Barton and Treize Khushrenada.  All but Trowa Barton decided to use the gundams, when he decided to rat to Dekim about it, he got shot and killed by a scientist who was concerned about his family on earth. An unknown man decided to assume Trowa’s Identity and steal his Gundam; The XXXG-01H Gundam Heavyarms to help the scientists fight against Dekim Barton, and become the Trowa Barton we know in the seires. The battle has ended and peace broke out between Earth and the colonies which now forms, The Earth Sphere Unified Nation. Seeing as they are no longer needed, the Gundam pilots; with the exception of Chang Wufei, decide to dispose of the gundams into the sun.

It is Christmas Eve and Relena Peacecraft/Darlian, is on a diplomatic mission to the newly formed colony X-18999. While there she is drugged and imprisoned by the colony leader, Marimaia Khushrenada. She is under the belief that her late father Treize Khushrenada wants her to take over the Earth (Though later on it’s revealed that this was one of Dekim’s many lies.) and decides to go through with the original Operation Meteor.  Heero Yuy (who is still having bad memories of accidentally killing a little girl and her dog during a mission) and Duo Maxwell decide to infiltrate the colony and disable it before it drops on earth. Trowa was already there at the time and shockingly finds out that Wufei is on Dekim’s side. Quatre finds out about the mission and decides that his friends need the Gundams if they were gonna have a fighting chance against Marimaia and her mobile suit serpant army. He manages to get the gundams out in time while at the same time Heero, Duo and Trowa stop the colony from dropping on the earth. In a daring escape attempt Heero manages to meet up with his Gundam: The Wing Gundam Zero; while Duo Trowa and Quatre Join a newly resurfaced Zechs Marquise and Lucrezia Noin to battle the serpents in Marimaias base in Brussels. Their only difficulty being they are trying not to kill the Serpent’s pilots while they disable the suits. Meanwhile Heero is trying to reach earth, but Wufei in his own gundam tries to stop him. As they fight Wufei explains his motivation that peace at the expense of soldiers who know only nothing but how to fight. Heero then convinces him otherwise by reminding him of his haunting memory (“How many times must I kill that girl and her dog?”) which strikes a chord on Wufei before Zero plummets into the ocean.  The people of earth decide to take a stand against Marimaia and her army knowing that they have to earn the peace by fighting for it themselves.  While all this is happening Relena tries to convince Marimaia that what she is doing is not what Treize wants but it falls on deaf ears. The Gundam pilots have ran out of ammo and contemplate whether or not they should use their detonating devices. Before they can decide, Wing Zero appears and uses his Twin Buster Rifle to break open Mariamaia’s shelter.  The first and second blast are effective but the recoil and the damage from the battle with Wufei causes Zero to fall apart. Heero fires one more blast at the shelter breaking it open explosively as well as tearing Zero apart destroying it. All the while, Wufei and the people of earth rebel against the serpents. Marimaia starts to experience fear of losing for the first time, but Dekim not ready to lose yet forces Marimaia to establish herself as ruler of Earth.  Before she can Relena finally and literally slaps some sense into her. Dekim tries to shoot Relena, but Marimaia takes the bullet and a soldier loyal to Treize kills Dekim in response. Marimaia apologizes to Relena for all she did, and Heero arrives pointing a gun at her offering to relieve her pain. When he pulls the trigger, surprisingly the gun isn’t loaded. Heero claims to have killed Marimaia and vows never to kill again.

As peace reigned again, Duo Trowa and Quatre detonate their gundams, destroying them for real this time. Trowa decides to keep the name so he wouldn’t remain nameless. Wufei detonated his Gundam alone. Sally Po offers him a job at being a Preventer, since Zechs and Lucrezia have departed earth to start Terraforming mars. Duo moves back to his colony and becomes a mechanic. Quatre moves back to his colony to take over his fathers job and finish constructing X-18999. Trowa returns to the circus to work with his sister. Marimaia pays her respects to her father, Trieze’s Grave. As for Heero he continues to watch over Relena Darliam as a bodyguard. Mobile suits including the gundams are never seen again. 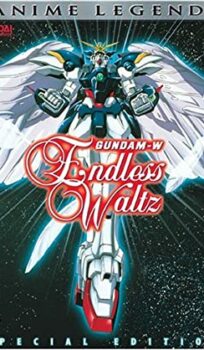