Sgt. Cutter (Cary Grant), Sgt. Ballantine (Douglas Fairbanks Jr) and Sgt McChesney are in the British Army in India.  They are a boozing, brawling group of troublemakers, and are the best of friends.  Their regiment is battling an uprising of the murderous Thuggee sect.  Gunga Din is servant of the troops, a water bearer whose job is to come running with water when the soldiers call in the severe heat.  He dreams of becoming a soldier, but the soldiers do not take him seriously.  Gunga Din secretly practices the regimental bugle calls.

Cutter learns of a temple of gold hidden in the jungle, and has Gunga Din lead him to it.  They find it and are amazed by the quantity of gold.  However, soon after the Thugs return, and they realize they are now hidden in the middle of the Thuggee temple.  Cutter creates a distraction so Gunga Din can run off to seek help.

Ballantine and McChesney barely let Gunga Din speak and run off to the rescue, not realizing the size of the forces at the temple. Ballantine, McChesney and Gunga Din are also captured.  The Thug leader reveals that this is exactly what he wanted.  He has hundreds of soldiers lining the pass into the valley.  When the British are in the pass, the Thugs will attack, and should be able to annihilate the trapped regiment.

The four captives are on the roof of the Thuggee temple,  to be forced to watch their troops be destroyed.  They fight their captors, and in the scuffle Gunga Din is stabbed.  The Thugs leave him for dead.  He is still alive.  He climbs the turret of the temple, and with his bugle sounds the alarm.  The British troops are warned, and are able to defeat the Thugs.  Of course, the Thugs on the temple roof kill Gunga Din.

The movie ends at Gunga Din’s funeral.  The colonel states that Gunga Din is being posthumously named a corporal in the regiment.  His name will be in the official lists of the regiment, and will be read in ceremonies where the dead of the regiment are remembered.  The colonal recites the final stanza of Rudyard Kipling’s poem, that inspired the movie, “By the livin’ God that made you, You’re a better man than I am, Gunga Din!” 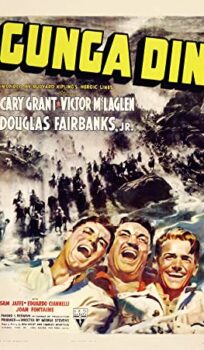