As a juvenile, a disturbed Michael kills a school bully, his Mother’s boyfriend, his big sister, and her boyfriend.  He spares his baby sister and appears to be protective of her.

While in the asylum, he attacks a nurse and ceases to speak.   His Mother (Mrs. Rob Zombie) kills herself as a result of all this.

15 years later he kills a crew of guards transferring him, and a guard (Danny Trejo) who showed him some sympathy.  He then kills a trucker for his clothes, a teenage couple doing the nasty, the adult couple who adopted his baby sister, another teenage couple doing the nasty (although it appears the girl might survive), a couple of cops, and his psychiatrist (Malcolm McDowell) who wrote a book about him.

He once again spares his baby sister who ultimately shoots him with a 357 magnum. 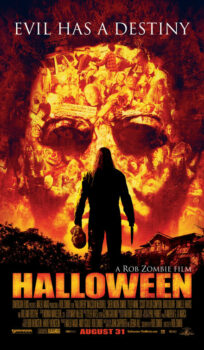