A who’s who of movie tough guys from the 50’s star in this WWII classic including Richard Widmark, Jack Palance, Neville Brand, Robert Wagner and Karl Malden.
Halls of Montezuma

The movie opens with a group of US Marines on a ship in the South Pacific preparing for the landing on an unnamed island. Below decks, Corporal Conroy is begging Lt. Anderson (Richard Widmark) to certify that he is ill or unstable or somehow unable to go into battle. Flashbacks reveal that Anderson had been a high school chemistry teacher before the war, and Conroy is one of his former students. It is also revealed that Anderson is suffering “psychological migraines” (what we would now call post traumatic stress). Anderson is relying on Doc (Karl Malden) to provide him with pain killers at stressful times. Only 7 of the original 42 men under his command are still alive, and Anderson states those 7 are all he still believes in and is fighting for.

On the island, the troops are under fire from Japanese rockets. If the rockets can not be destroyed they will be mowed down when they try to advance. They are given a few hours to find the location of the rocket launchers. The Lt. Col. gives them 9 hours to find the location, and assigns Anderson and his men to advance quietly and try to capture some Japanese prisoners. They want to try to get information out of the prisoners. 4 prisoners are captured. In the capture, Zelenko is blinded. “Pretty boy” goes crazy and tries to kill the Japanese prisoners. “Pigeon” Lane (Jack Palance) stops Pretty Boy, but in the scuffle, pretty boy is accidentally shot. Doc is also hit by enemy fire, and dies. (4 of the the 7 are now gone, Zelenko, Doc, Pretty Boy and Coffman who died in the landing.)

A captured Japanese officer is bragging about how the Japanese are so superior, and know how to live and how to die better than the Americans. The prisoner brags about how the Japanese can outsmart the Americans. In his bragging, he accidentally gives them the final clue, that the Japanese put the rockets in the last place the Americans would think. With this clue they realize the rocket launchers are on the forward slope of the hill, and American bombers take out the rocket sites. At this point, Anderson learns that his former student Conroy has just died. Anderson is devastated by the news. Just then, Anderson is given a final letter that Doc wrote, while Doc was dying. Doc’s words give him the strength to destroy the bottle of painkillers. He leads Lane and Slattery (the last of the 7 he was fighting for) and the replacement soldiers into battle. We are not told what happens to them after this point. 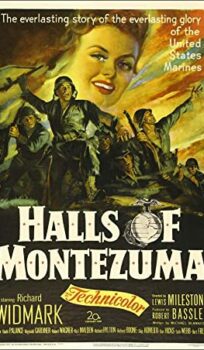