SHORT VERSION:
Neither Richard nor Barry gets anywhere in their acting careers.

Barry’s life goes down the drain; his agent Morris dies, and he winds up having to represent himself since no other agent wants him. His wife, Beth, divorces him and takes him to the cleaners, and he moves into the basement of an old woman’s house and also goes back to working as a telemarketer between auditions, though he still performs poorly at it. However, despite having lost everything, he is still (foolishly) determined to make it in show business.

Richard gets conned out of a chance at being the new spokesperson for Pepsi by his roommate Pat without realizing it, since he was high on marijuana at the time of the audition and was told by Pat to use his name instead of his own, and Pat moves to Los Angeles once he gets the offer. Also, Richard’s attempts to hook up with fellow theatrical troupe member Jennifer all end in failure, as does a play that the troupe puts on. He ends up traveling to Los Angeles to locate Pat, and he finds him living in a Hollywood Hills mansion that he bought with the money he received from Pepsi. Richard becomes his roommate again (and though Pat still finds his presence unwelcome, he still won’t make him leave), and he also goes back to doing mascot work by performing as the Hotdog King in front of Grauman’s Chinese Theatre and handing out flyers to passersby, though he believes this to be a steady acting gig. Through all of this, he honestly thinks he has found success as an actor.

BARRY’S STORY:
Barry (Jason Jones) is an actor who dreams of stardom, even though he is devoid of talent. He lives with his wife, Beth (Samantha Bee), a successful bank manager, and he holds a job as a telemarketer for the Canadian Theatre Company between auditions, though he is incompetent at it. One day, he finds out that his agent Morris (Desmond Scott) – who has represented him since he was a teenager – is dying.

Eventually, after going through a few bad auditions, Barry gets a spot in a commercial, but his face is obstructed through all of it. He misconceives landing this gig as his acting career finally taking off, so he quits his telemarketing job. When Beth complains about this decision, he tells her that he wants time apart from her so he can concentrate more on acting. She kicks him out of their home, and he first lodges in a nice hotel before ending up in a seedy motel when his funds run low.

He then lands a small role on a Movie of the Week police drama, but he gets fired after blowing ten takes of his only line. One of the other actors there, Daryl (Dwayne Hill), mistakes Barry’s odd behavior and constant screw-ups for natural comedy and thus offers him a chance to perform stand-up comedy at a televised show he is holding at the Yuk Yuk’s Comedy Club that will be attended by influential entertainment figures. Barry accepts his offer, and he calls Beth and leaves a message on her answering machine asking her to come and watch his performance. He also mentions in the message that Morris has since passed away.

Though Beth does attend Barry’s performance, he predictably flops. While he is sobbing outside afterward, Beth approaches him, and he tries to spark a reconciliation with her. She informs him that she is seeing someone else now and just wanted to tell him how sorry she feels for him, but when he willfully ignores what she is saying and keeps trying to sweet-talk her, she loses her temper and tells him that he truly deserves everything that is coming to him. Her new boyfriend then pulls up in his car, and as she steps into it, she makes it clear to Barry that their marriage is over. The blubbering Barry lays on the car’s hood to try to keep her from leaving, so she calls the cops on him and gets him arrested.

Barry is last shown living in the basement of an old woman’s house, and we find out that Beth divorced him and took him to the cleaners, and he has also returned to his old telemarketing job (though he still performs poorly at it). He also now represents himself since no agent anywhere wants him. However, despite losing everything, he (foolishly) refuses to give up on his dream of making it in show business.

RICHARD’S STORY:
Richard (Mike Beaver) is an aspiring actor who dreams of stardom, even though he is devoid of talent. He suffers from an unspecified mental handicap, lives with his parents, and works at Marineland cutting and sorting fish for the animals there in addition to performing as its mascot, King Waldorf. After an audition for a community play ends badly, Richard decides to move to Toronto to pursue better acting opportunities. He lodges with Pat (Christian Potenza) – a stoner and fellow aspiring actor – in his apartment. Though Richard tells the documentary crew that he knew Pat in high school and considers him a friend, Pat doesn’t know who he is and finds his presence unwelcome, yet he won’t make him leave. After seeing how bad Richard’s acting skills are, Pat suggests to him that he should look for an acting teacher, so he thus becomes a client of Tom Brennemen (Dave Foley). Richard later meets Katie (Jennifer Baxter), Pat’s new girlfriend who dreams of acting success herself, and he is instantly attracted to her.

Tom soon gives up on Richard upon realizing how much of a hopeless case he is. Some days later, Richard smokes marijuana for the first time with Pat and Katie, and Pat brings up how he is supposed to be doing an audition for a Pepsi commercial later today and suggests to Richard that, as a joke, he should go in his place and use his name, and Katie supports this idea because it would be his first real audition. Richard does the audition while he is still stoned and believes that he hasn’t gotten the part. Later, Katie manages to get Richard a spot in an upcoming play being put on by a fringe theatrical troupe that she belongs to, headed by the eccentric Damien (Rob Tinkler). After a troupe meeting one night, Richard learns from Katie that she and Pat just broke up after he landed a “big job” and moved away. When Richard returns to the apartment, he indeed finds it barren save for a note from Pat saying that he got the Pepsi gig and has moved to Los Angeles (and because Richard was high during the audition, he never figures out that Pat had swindled him out of this opportunity).

Richard’s feelings for Katie grow, and Katie mentions during another troupe meeting that she has sexual feelings for one of the members. Richard and Katie end up having sex with each other during an orgy that Damien initiates, and afterward, Damien finally decides that their play will be about birds, and they will stage it behind an abandoned sponge factory, though they have just two days to rehearse. The next day, he develops a testy personality with everyone, then lashes out at Richard for eyeballing “his girl” Katie. Shortly afterward, Richard talks to Katie about how peeved Damien is because of the connection they forged through their sexual interaction, but she replies that that meant nothing because it was just “rehearsal sex” between their characters. She then confirms that she is involved with Damien because he can possibly further her career.

Come time for the play to start, Damien is a no-show, and Katie tells the troupe that he won’t be coming because they got into an argument that afternoon and split up. When the other troupe members consider canceling the show, Richard decides to step up and assume directorial duties and encourages the others to do the show with him, saying that they put time and effort into it and it would be wrong to walk away from it now. As they perform, Damien shows up on the roof above them with his bird costume on, and he rebukes both Katie for dumping him and Richard for taking over the production. He then tries to fly off the roof, but he falls straight to the ground and sustains multiple injuries. The troupe calls an ambulance for him and he is loaded into it, and Richard and Katie end up staying behind while the others ride to the hospital with him. Katie tells Richard that she stayed because she wanted to stay with her true love, but this turns out to be the silent member Derek (Mike “Nug” Nahrgang); Katie has now hooked up with him after he told her that his father is a film producer (though it is hinted that he lied about that so that he could get into her pants). She extends an invitation to Richard to come join them for coffee, but he refuses. He then tries to tell them that he learned something valuable tonight about the real him, but they just walk away from him.

Richard is next shown out in Los Angeles. He narrates that, after the play, he couldn’t afford to stay in the apartment anymore, so he decided to venture out to Los Angeles to locate Pat. He eventually finds Pat living in a Hollywood Hills mansion that he bought with the money he received for becoming the spokesperson for Pepsi, and he moves in with him again despite the fact that Pat clearly still doesn’t enjoy his presence (but yet he still won’t make him leave). Richard says that he sees Katie now and again, but in whatever pornographic films she now appears in. He then happily says that he landed his first big acting gig here, but it turns out to be him wearing a Hotdog King costume and handing out flyers to passersby in front of Grauman’s Chinese Theatre. Nonetheless, he truly believes that he has made it in show business. He is last shown running into the woods away from the home of Victoria Pratt (herself) after she catches him swimming naked in her pool. 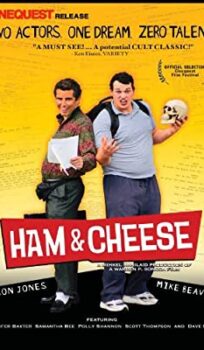