When failed actor Dana Marschz learns that the high school drama class he teaches is being eliminated, he decides to raise funding for it by starring in a production of his own work, “Hamlet 2”.

The play is a musical in which Jesus uses a time machine to bring back to life all of the characters who were killed in Shakespeare’s “Hamlet”.

Controversy erupts when local residents hear about the sex, violence and blasphemy in the script. As a result of the uproar, the play is sold out on opening night. Despite the fact that it is poorly written and in very bad taste, the play is a hit.

Elizabeth Shue (playing herself) falls in love with Marschz after seeing the show and even calls her agent to tell him about the work. The production is eventually brought to Broadway, where Marschz maintains his artistic integrity by turning down such A-list actors as Jeremy Irons in order to stage the show with its original cast. 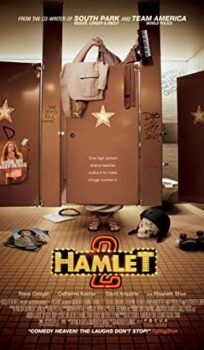