There she runs into an old friend who she went to school with in the first grade. She falls in love with him and he with her. She find out her town was owned by a wealthy farmer who passes away and left all the land to the county but they can’t afford to keep it because they owe 500,000 dollars in back taxes and a developer wants to turn it into a strip mall.

The town has a fund raiser and the developer tells them there is no way they can raise that kind of money. Miley’s crush tells the town that Miley knows Hannah Montana and she’ll invite her to sing so they can save the town. She agrees and finds her self caught between being Hannah and being Miley.

Her secret is blown when she tries to do two things at once, the Mayors dinner and going on a date with her crush. She blows the dinner trying to do both at once and then rushes out to be with her crush. On the way out she takes her wig off and is seen by a fan and by her crush. Her crush tells her that she lied and tells him he wants nothing to do with it.

She decides to go ahead with the concert only to stop in the middle of the performance and tell the town who she is. Then she performs her song, The Climb and then tells town that she can’t be Hannah anymore. The town tells her that they will keep the secret if she continues to be Hannah to keep the dream alive. So she does and the crush forgives here. 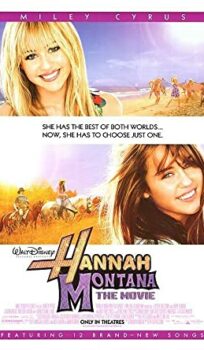