Hannibal Lecter (Anthony Hopkins) steps into Mason Verger’s (Gary Oldman’s) trap. Is he blinded by devotion to Clarice (Juilianne Moore)? Confident in her ability to rescue him? Attempting to restore her self-confidence? Sadly, the reasons are never explored. Her rescue raid is 95% successful, but she is shot by the last of Verger’s henchmen. Hannibal carries her away, but not before giving Cordell (Zeljko Ivanek) all the encouragement he needs to drop Verger to his own man-eating hogs. Hannibal attends to Clarice’s wounds, and then attempts to woo her by feeding Krendler (Ray Liotta) sauteéd pieces of his own frontal lobe. She makes one last-ditch attempt to capture Lecter in Krendler’s kitchen, handcuffing herself to him while she is hopelessly affixed to a refrigerator. As sirens announce the arrival of law enforcement, Lecter picks up a meat cleaver… and uses it to slice off his own hand and escape. 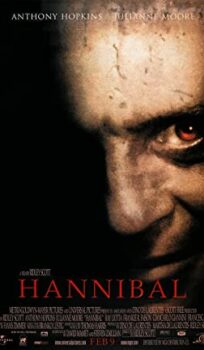