Long Ending:
Similar to The Graduate with Simon and Garfunkel, this film is set to a soundtrack written and performed by Cat Stevens.

Harold (Bud Cort) is a young adult (early-twenties?) living at home with his mother Mrs. Chasen (Vivian Pickles). They are fabulously wealthy, and Harold’s mom is obsessed with mainstream culture and high society. The two simply cannot relate to each other. Harold is  very odd. He has no friends, constantly wears black or gray, drives a hearse, and also likes  to attend random people’s funerals. Harold also has a habit of faking his death. His mother forces him to go to a therapist, who views Harold as an interesting case but has no real desire to understand Harold.

One day while attending a funeral, an old woman named Maude (Ruth Gordon) approaches him. They strike up a conversation and Maude reveals she is 79-years-old and sees no reason why anybody would want to celebrate death at a funeral when there is so much life to live (though she notes that 80 years is enough life). She then drives off in a car, and Harold realizes later, that Maude stole the car.

The two bump into each other several more times and Maude tells Harold to swing by her house any time. Maude is a truly free-spirit, who loves music, dance, art, nature and has contempt for the law as she constantly steals cars and flaunts traffic laws (Maude talks about having survived political unrest in her past and has a numbered tattoo on her arm. Though  never expressly stated, these clues suggest that Maude is a Holocaust survivor). She becomes Harold’s friend and encourages him to embrace life and try new things. She gives him a banjo and tells him to learn to play. They steal a tree (city property) that was dying in the city and take it into the forest to plant it in a healthier environment. Harold admits that when he once survived a fire he accidentally set and, when he saw his mother’s over-dramatic reactions to his loss, discovered that he preferred being dead.

Meanwhile, Harold’s mother is still ignoring him and his desires. She fills out a dating form on Harold’s behalf (answering the questions to his dating profile in accordance with her opinions)  and submits it to a matchmaking agency. On each date, Harold pretends to kill or mutilate himself to chase the girl away. His mother buys Harold a stylish new Jaguar, but he paints it black and converts it into a hearse. The mother sends Harold to his Uncle Victor (Charles Tyner) – a lifelong military big-wig who idealizes war despite the fact that he lost an arm in battle. Maude helps Harold come up with a plan whereby Uncle Victor determines that Harold is unfit to serve in the military.

Through all of this, Harold grows happy due to his relationship with Maude. She confesses that Harold makes her feel like a school-girl. Harold also begins dressing more colorfully and trying new things. The two attend a fair and after a fun-filled night, the two sleep together. Harold goes home the next day and tells his mom that he intends to marry Maude. The mother is disgusted and has Uncle Victor, their priest, and Harold’s psychologist all try to talk him out of it. Harold ignores them all.

He intends to propose at Maude’s 80th birthday. He has filled her home with flowers and made her a beautiful cake. Before he can propose, Maude confesses that she has taken pills to commit suicide as she doesn’t want to live as an 80-year-old woman (she mentioned this at the beginning of the film). Harold calls an ambulance and on the way to the hospital, tells her he is in love with her. Maude reciprocates, but also tells him he needs to “go and love some more.” The doctors are unable to save Maude.

We watch as Harold drives his Jaguar-hearse as tears stream down his face. We watch as the car plummets over the cliff. The camera lingers on the car, before panning up to see Harold still alive at the top of the cliff. He no longer wears black. Harold looks out at the ocean and then dances off into a field of flowers while playing a song Maude taught him on the banjo she gave him (Harold chooses life and love, while the crushed hearse represents the death of Harold’s own preference to be dead). 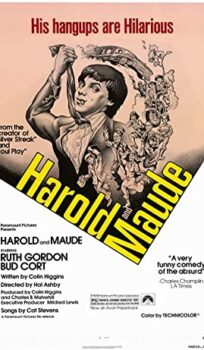