The film ends almost exactly where it begins, with a throng of screaming girls chasing the Monkees, who barge through a bridge’s ribbon-cutting ceremony and make an apparently-suicidal leap from the bridge into the river far below. However, the second time around, the Monkees don’tland in the river,but rather in a large, transparent tank of water. A trock drives away with the Monkees trapped in their “fishbowl.” 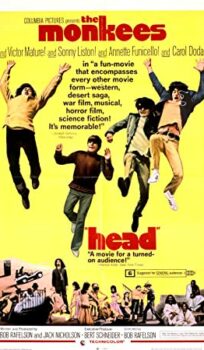