NOTE from Evan – This movie is completely open-ended and open to interpretation a la Donnie Darko. I have watched a good chunk of the director’s commentary and conducted internet research to create this pooper. If interested in seeing this film, however, it is best to watch it yourself and reach your own conclusions. Some hints to those watching: 1) The director says that this is to be a fairy tale, much like Cinderella; 2) a red color-scheme indicates reality, and a green color-scheme indicates fantasy.

Short Ending:
Jamie ends up dying when he is incinerated by a gang member. The film ends with Jamie welcoming death, reflecting on a memory when he was a boy with his dad in which his dad tells him that beauty shines even brighter when things seem at their darkness, noting you need perfect dark to see the full range of stars. The memory morphs to reality, with adult Jamie embracing his dead father as he himself dies. The last scene focuses on bright stars in the night sky.

Super Mega Long ending:
Jamie Morgan (Jim Sturgess) was born with about half his body covered in horrifically grotesque birthmarks, including a large heart-shaped birthmark covering half his face. Due to his disfigurement, Jamie is reclusive, living with his mom and unable to build any relationship with his family. He loved his father, who has been dead for many years, and has become a photographer in his dad’s footsteps. Since his father has died, society has devoled, with various youths committing random acts of horrific violence. His brother has a family of his own, but his nephew Lee (Luke Treadaway) seems troubled. While out taking photographs, around town, Jamie hears an unnatural screaming. He goes to investigate and discovers gang members lighting buildings on fire, and when the gang members discover Jamie there, he discovers that they are, in fact, demons. Jamie also develops an attraction to a female named Tia (Clemence Poesy) who had been modeling for his brother and Lee.

Later that night, Jamie and his mother are watching the news and see a report that says gang members in “demon” masks have been committing senseless acts of violence. Jamie comments that he can’t understand how people can be so reckless and violent. He also befriends an ex gang-member named A.J., and confesses that he is prone to fantasizing a “parallel life” in which he is not marred by his bithmark and is able to have a family. We also learn that Jamie has attempted suicide earlier in his life, and that he has been raised in a religious household. For his mother’s birthday, he gives his mother a framed photo of his father, who he deems to be pure. Lee gives his grandmother a very expensive gold necklace. Soon after visiting his father’s gravesite, however, Jamie and his mother are assaulted by the demonic gang on the street, and Jamie’s mother is killed when one of the demons throws a molotov cocktail at her. At this point Jamie’s life begins to spin out of control, and he buys a gun to use against the demons nd almost uses it to commit suicide.

Later, he finds that A.J. is facing problms with his old gang-leader named She. After going to meet She, A.J.’s body is found decapitated in the local river. Jamie cloisters himself in his mother’s apartment. and one day catches Lee attempting to find the necklace he gave his grandmother. Jamie says it is in the safe at work and that Lee can’t have it back. Later on, Jamie gets a mysterious set of texts directing him to a mysterious building. Once there, he meets the devil-like figure “Papa B” (Joseph Mawle) and his child assistant Belle (Nikita Mistry). Papa B is immortal, surviving Jamie’s initial attempts to shoot him after Papa B admits to ordering his mother’s death. Papa B states that chaos, and not peace, is what drives humanity to evolve and reach their greatest potential. So, Papa B offers to cure Jamie of his birthmarks if Jamie will spraypaint graffiti throughout the city and thus spread chaos. Belle convinces Jamie to accept the deal, and Jamie lights himself on fire with a molotov cocktail in order to be reborn without his birthmarks.

Having been fully cured, Jamie is uber-confident. He meets Tia and convinces her to go on a date with him. Soon after, however, he is met by the Weapons Man who works for Papa B. Weapons Man informs him that Papa B has changed the terms of their deal, and that Jamie has until midnight to kill another human, cut out the victim’s heart, and leave it on the steps of a church or else he will become ugly again (mirroring Cinderella’s story and perverting Jamie’s religious faith). Weapons Man also tells Jamie he must commit the murder with his dad’s knife (perverting Jamie’s memories). With the help of Belle who has taken an interest in Jamie, he invites a male prostitute to his house and ends up killing him and delivering his heart to the church just in time.

Thinking his debt has been paid, Jamie consummates his relationship with Tia, who tells him he is beautiful. Belle also decides to leave Papa B and says that Jamie is now her father. He is finally handsome and has a loving family, just as he had envisioned in his parallel life. Unfortunately, Papa B becomes infuriated that Belle has left his service to become Jamie’s daughter and demands that Jamie kill Tia and deliver her heart to him. Though Belle urges Jamie to kill Tia, he can’t bring himself to do it. Meanwhile, Tia is concerned by recent reports of robberies, and asks to place her family photo album in Jamie’s work vault. Once there, Tia confesses her eternal love to Jamie, saying she never meant to fall for him. Jamie thinks she knows that he is to sacrifice her, but it turns out that Tia is a prostitute who was working with Lee. Lee was involved in She’s gang and owed She money. Lee convinced Tia to help him get access to the work vault by developing a relationship withJ amie so he could obtain the gold necklace and repay his debt to She. Lee, in desperation, threatens to kill Jamie, but Tia engages him in a struggle where she is fatally shot by Lee. In a panic, Lee runs from the work place but is himself wounded by She. Then, She attempts to kill Jamie, but is killed himself in the struggle. Jamie notices that She’s hand looks very similar to Papa B. The demonic gang then appears and pursues Jamie.

As Jamie flees, he tells Belle that he doesn’t want her to follow him any more. Jamie realizes that Belle never existed (and was modeled after a girl he saw in the earlier news report discussing the demon-mask gang). She disappears, symbolizing that he no longer needs this fantasy world to function. As Belle disappears, a shard of glass takes her place and Jamie realizes that he is still covered in birth marks. As he reflects, he discovers that his relationship with Tia occurred though he was disfigured, and that Tia loved him despite his deformity. He also discovers that he himself was capable of the dark atrocities committed by the gang (and it is unclear whether he actually committed the murder of the male prostitute). Papa B confronts Jamie, and Jamie states he is no longer afraid of Papa B (thus stating he no longer fears his ugly/violent side). Having come to terms with reality, Jamie walks back outside and sees demon-masks lying on the ground, reaffirming that the gang members were, in fact, human. As he walks from the building, he comes across two gang members who yell a line heard earlier in the film (suggesting Jamie has died much earlier and hallucinated most of the film) and then light him on fire with a molotov.

Jamie looks relieved as he begins burning and closes his eyes. He revisits a memory of himself as a young child with his father at a park. Young Jamie is very upset that he is ugly and other children avoid him. His dad tells him a story about when he went camping as a child, he was overwhelmed by the beauty of the stars at night. He tells Jamie that sometimes, true beauty can only be seen in the darkest night. Jamie realizes that despite his own ugliness and the ugliness of the world, both he and the world contain great beauty and facing both his own darkness and the darkness of the world has caused him to recognize his beauty (i.e. his self-confidence, Tia’s love, opposing the gang members). In his memory, young Jamie morphs into adult Jamie and he and his father embrace and are reunited. The film itself begins burning (just as Jamie himself is burning in the real world), but Jamie finally seems completely happy. The screen goes dark, illuminated brilliantly by the stars. 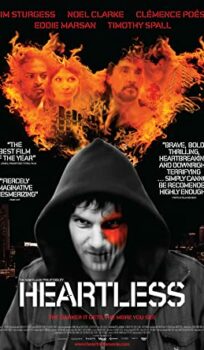