Hector and the Search for Happiness(2014)

Hector (Simon Pegg) is a psychologist who has become bored and disillusioned with his life and his patients so he decides to go on a quest to discover the true meaning of happiness.  He has several misadventures such as meeting a prostitute in China, being kidnapped in Africa and befriending a drug kingpin. All along the way he asks people what happiness is and keeps a log of his journey.

He finally makes his way to Los Angeles where he meets up with Agnes (Toni Collette), a fellow psych professional and his long time crush. But Agnes has moved on and is now married with children, and tells Hector that he needs to move on too.

During a psych experiment with behaviorist Prof. Coreman (Christopher Plummer), Hector realizes his true meaning of happiness is being with his girlfriend, Clara, and starting a real life and family with her.

In the end they get married and Hector has a renewed passion for life, Clara and his patients. 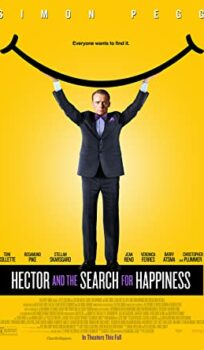