The movie begins with Chelsea, Allison, Derrick, Jake and Mike attending the funeral of their friend Adam, who committed suicide. He had become obsessed with a game called “Hellworld” based upon the Hellraiser saga.

The four get an invitation to attend a Hellworld party which is hosted by Lance Henriksen (aptly named The Host). As one would expect, weird things start happening and Pinhead makes random appearances. Derrick, Mike, and Allison are all killed off in various ways.

In the end, we find out that throughout the entire course of the movie, the group has actually been drugged by Lance Henriksen (who turns out to be Adam’s dad and blames them for his son’s death) and they have been inside coffins buried underground with a tube for air. All of the nightmares they saw and experienced were due to the drugs and their own imagination. The ones who died during the movie still died while in the coffins (by fear, an asthma attack, and gouging of the neck).

The Host leaves Chelsea and Jake buried, assuming they will die a slow, painful death. However, the ghost of Adam calls the police who trace the phone call and saved Chelsea and Jake just in time.

The Host, thinking he has gotten his revenge, is sitting in a hotel room getting drunk. He pulls out the Lament Configuration and brings the cenobites who cut him into several pieces.

At the end of the movie, Chelsea and Jake are driving across the country to start their life over. Lance Henriksen appears in the rearview mirror and grabs the wheel. When Chelsea looks in the backseat, he is gone. Meanwhile, the police have found Lance’s hotel room which is covered in blood. The Lament Configuration is sitting on the floor. 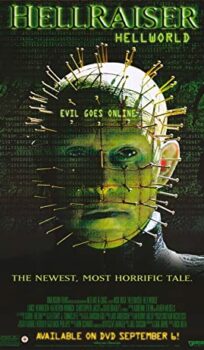