After TJ (Devin Brochu) inadvertently calls attention to Hesher (Joseph Gordon-Levitt) living in a vacant house, Hesher follows him home and moves into his garage. TJ’s father, Paul (Rainn Wilson), is too incapacitated by grief over his recently deceased wife that he does nothing much to stop him.  TJ’s grandmother (Piper Laurie) lives with them, and is kind and generous to all, including Hesher, not asking too many questions, other than to invite TJ on her morning walk.

Hesher proceeds to “help” TJ in various ways, but not in any way that could be described as “compassionate.”  In one instance, he brings TJ along to get some payback for a bully who continually tortures him.  He gets TJ to pour gasoline in the bully’s convertible, and then lights it on fire.  TJ is too slow getting into Hesher’s van, so Hesher drives off, leaving TJ to think he’s been abandoned.  Later, he actually hits TJ with his van (though TJ is essentially unharmed).  TJ is not charmed by Hesher’s insistence on bringing chaos to his life.

During a run-in with the bully, TJ meets Nicole (Natalie Portman), a checker at a local grocery store.  She rescues him from the bully and drives him home.  He starts skulking around her store, watching her from afar.  Hesher, following TJ, eventually deduces his crush, and pushes him to ask her out or at least try and sleep with her.  TJ, disgusted, leaves the store.

Throughout the film, TJ makes attempts to buy back the wrecked car in which his mother died.  The owner of the wrecking yard, also the father of the bully, refuses to sell the car to TJ, and eventually reveals it has been junked. TJ finds the car in the wrecking yard, and is nearly killed when the car is plucked to be crushed.

Meanwhile, Hesher returns to TJ’s home, where TJ’s grandmother is in deteriorating health.  Hesher and the grandmother talk, and Hesher discovers she uses medical marijuana to manage her pain.  He shows her how to use a bong.  She gets tired after taking a hit, and before she falls asleep, Hesher tells her he’ll accompany her on her morning walk.

Later on, TJ discovers his grandmother has collapsed and died while preparing to go out for her walk.

The funeral is a few days later, and TJ and Paul have not seen Hesher.  He shows up to the funeral, drinking a beer.  Hesher gets up to speak, much to everyone’s horror.  During his remarks, Hesher starts to get angry at TJ and Paul, who never went on a walk with her, a simple request they never bothered to fulfill.  He yells to them that this is their last chance, and he starts rolling the casket out of the funeral home and into the street.  TJ and Paul follow, and catch up to Hesher, taking Grandma on the “walk” she’d been asking for for so long.

The film ends as Hesher finally vacates TJ and Paul’s house without a word, leaving behind the wrecked car TJ had been pursuing the entire film on the driveway, now crushed into a neat cube.  He also left some graffiti on the roof, “Hesher was here.” 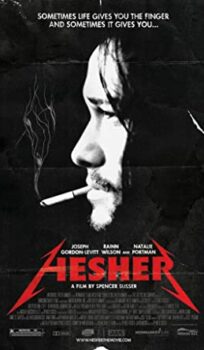