SHORT VERSION:
Paco and his gang manage to get Richard fired from his job by switching the academic proficiency tests with ones that all have failing scores, and the disillusioned Griff joins Paco’s gang. When Victoria gets word of Griff participating in an upcoming drug deal with the gang and their boss Mr. A at the boss’ restaurant, as well as finding out that the tests were switched, she finds Richard and gives him this news. Together, they infiltrate the back room of the restaurant where the deal is taking place, planning to find Griff and get him out of there.

Soon after arriving, they discover that Mr. A is Principal Doyle (her husband was the original Mr. A and she took over his drug dealing operation after his death). Paco and his gang have (more than likely) been peddling her drugs in the school, and she and Paco conspired to get Richard fired because the positive changes he was bringing to the school and to the neighborhood were threatening her operation. In the end, Griff – along with Anferny and a bunch of other students that show up – helps Richard and Victoria defeat Doyle, Paco, and the other lowlifes and get them arrested.

Richard becomes the new principal, and Anferny, Julie, Natalie, and Griff graduate later that year, with Griff as valedictorian, but they are four of just six people that graduate.

LONG VERSION:
Through Richard’s (Jon Lovitz) teachings and Griff’s (Mekhi Phifer) leadership among the students, the school – and even the tough neighborhood it is in – makes a dramatic turnaround into a more friendly place, and come time for the academic proficiency test, a lot of Richard’s students look to pass it. However, Paco (Guillermo Diaz) and his gang – determined to get Richard out of the picture – break into the school after hours and switch the tests with a bunch of duplicates that all have failing scores. The next day, Principal Doyle (Louise Fletcher) comes to Richard’s class, and she informs the students that they all flunked the test and then fires Richard. Griff and the other students lose faith in him and in themselves, and Richard loses faith in himself as well.

Victoria (Tia Carrere) has trouble contacting Richard in the days that follow, and Natalie (Malinda Williams) expresses concern to her and Julie (Natasha Gregson Wagner) that Griff is going to join Paco’s gang (which he has). Anferny (Brian Hooks) then comes up to them and tells them that he got word that Paco and his buddies had switched the tests. Knowing that they need to find Richard and enlighten him to this, Victoria realizes that he must be getting dim sum in Chinatown, since he earlier told her that that is what he does whenever he feels down. She and the others go there and split up to look for him, and Victoria finds him first, all drunk and disoriented. She gets him out of there, and the group later heads for Mr. A’s Restaurant, since Anferny knows that Paco and his gang are going to be conducting a drug deal there with their boss, “Mr. A”, and DeMarco (Marco Rodriguez), and they plan to get Griff out of there before he crosses a line that he can’t turn back from.

On a suggestion from Anferny, Richard and Victoria find DeMarco and, while pretending to be waiters, they secretly steal his briefcase full of cash for the deal. They then go to the meeting room in the back of the restaurant and gain access by saying they work for DeMarco, and they spare themselves from getting shot by Paco by saying that they are really drug dealers and were just posing as school staff the whole time. When Richard asks where “Mr. A” is, Mr. A steps out from the shadows and reveals herself to be Principal Doyle. Her late husband was “Mr. A”, and she took over his drug dealing operation when he died (it is more than likely that she was having Paco and his crew peddle her drugs at the school, and Richard and the positive changes he brought to the place and to the neighborhood was threatening her operation, so she conspired with Paco to get Richard fired). When Doyle and Paco leave for a moment to get the drugs, Richard and Victoria tell Griff that they’re here to save him, and that Paco had switched the tests and the police are probably already on their way here. Before they can leave with him, DeMarco barges in and ends Richard’s masquerade. Before DeMarco can dismember Richard and Victoria, Anferny enters with his gang and an all-out brawl ensues. Victoria and Griff beat up Paco and DeMarco while Richard chases after the escaping Doyle.

The chase ends inside the restaurant, and Doyle pulls a gun on him, but she gets surrounded by Richard, Victoria, Anferny, his gang, and some other arriving students. Doyle calls the students a bunch of boneheads, but they show her that they are anything but by correctly answering random academic questions that Griff asks them. In the midst of this, she tries to hold Richard hostage, but the cops show up and cuff her. All of the other lowlifes are rounded up and arrested as well, and the students cheer while Richard and Victoria embrace.

Richard becomes the new principal, and come graduation day, he finally gets the approval of his father for the good work he has done. Anferny, Julie, Natalie, Griff, and two others are shown graduating, with Griff as valedictorian, but it turns out that they are the only graduates for that year. 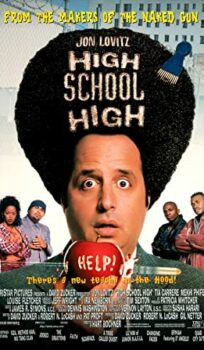