The film is about the life of Hatidze, a Turkish Macedonian peasant who practices the traditional and delicate art of wild beekeeping and honey collection; she makes ends meet from collecting artisan honey off her wild bees’ colony, which she sells in Skopje, the capital city. She lives in a remote, primitive shack with her ailing, bedridden, blind mother Nazife, in the countryside.

An errant family of cow herders, formed by father Hussein, his wife Ljutvie and their seven rambunctious children, moves in nearby. At first, they all get along well and Hatidze even gets to spend some time with the kids (especially young adolescent Veli, to whom she feels closer than the others). Hussein shows interest in learning to do beekeeping, which Hatidze shows him, while giving him a piece of her colony; but she warns him that “he must always save half of whatever honey the bees produce” (the reason for this being that the bees consume this leftover bee, thus restarting the cycle, maintaining the balance and preventing them from wandering off, out of hunger, and potentially attacking other colonies).

Enticed by a customer who offers him more money if he can turn up more honey, Hussein disregards Hatidze’s advice, forces his colony of bees to overproduce honey, gets the entire family to work with him on it (many of them are seen getting repeatedly stung by the bees and affected by it) and just sells the entire batch, not saving any. At the same time, he orders the family to break contact with Hatidze (obviously because he wanted to avoid getting in trouble for what he was doing).

Hussein’s irresponsible actions have dire consequences: his bees attack and decimate Hatidze’s colony (she confronts him over it, but he and his family all feign ignorance of the matter). Hatidze and Veli go trekking around; he admits what his father did and they bond over Hatidze’s childlessness and the harshness of those lands.

Hussein and his customer further predate local trees which hold the remainder of bees and honeycombs, effectively leaving Hatidze with nothing, for which she disowns Hussein. Later, during winter, a large number of his cattle succumb to a mysterious illness, further straining their situation and forcing the whole family and remaining animals to move away. Hatidze struggles to take care of herself and Nazife, who eventually dies, leaving her alone and heartbroken.

In the final film’s sequence, the brave woman is seen joyfully collecting a piece of honeycomb from that same steep risk seen at the beginning, which gives her some hope that she could start over, after all. 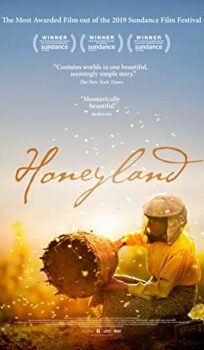