SHORT VERSION:
Just as Operation: Sleepy Weasel is underway (where the objective is to destroy a nuclear weapons plant in Falafel Heights in Iraq before it goes online), Block – in accordance with the scheme he and Wilson agreed upon to make the Navy’s planes seem inferior so the President will buy Wilson’s superfighter jets – tells Topper that his father Buzz would be proud of him, causing him to have an attack of paternal conflict syndrome and freeze up. Block then orders the squadron to abort the mission, but by this point, six Iraqi planes have appeared, so he changes his mind and orders the pilots to engage the enemy jets. However, the pilots discover that their planes have various problems that are keeping them from effectively fighting back (thanks to Wilson and his assistant Rosener having the planes sabotaged, since Wilson felt that they needed to fail in combat in order to convince the President to buy his superfighters). Block realizes that Wilson and Rosener are responsible for this, and with Benson and everyone else in the aircraft carrier’s communications room listening in, he says this out loud in addition to the fact that Wilson went back on his promise that no pilots would get hurt from their scheme.

Block is ordered to retreat, but he refuses, saying that he has the best pilot in the world up here. He then informs Topper that he was a witness to Buzz’s and Mailman’s fateful flight 20 years ago, and he tells him that Buzz did everything he possibly could to save Mailman, but he fell out of their plane while trying. This revelation gives Topper the confidence he needs to take out the Iraqi jets using methods that don’t involve guns or missiles, but one jet manages to fire two heat seeking missiles at him. Topper decides to use them to blow up the nuclear plant, so he heads over to its location and flies in low, then pulls up right when he reaches the primary building, causing the missiles to go right into it and obliterate the whole plant (and Topper also drops a bomb right down on Saddam Hussein himself in the process).

LONG VERSION:
We find out that, out of a belief that America is in danger of falling behind enemy nations in state-of-the-art armaments, LCDR Block (Kevin Dunn) has partnered up with Wilson (Efrem Zimbalist Jr.), the head of Rockman Aviation, to conduct a scheme centered around sabotaging Operation: Sleepy Weasel and convincing the President to buy a bunch of new superfighter jets that Wilson’s company has made. As part of the plan, Block persuaded his superiors – specifically the operation’s commander RDML Benson (Lloyd Bridges) – to let Topper (Charlie Sheen) return to the Navy and join the operation’s squadron, knowing that Topper has paternal conflict syndrome that gets triggered whenever he hears his father Buzz’s (Bill Irwin) name and knowing that he always screws up as a result of it. Block plans to mention Buzz’s name to Topper early in the operation and cause him to lose his composure, which will result in the rest of the squadron becoming unable to function properly and give Block an excuse to abort the mission. This will, in turn, make the Navy’s planes look inferior and spur the President to purchase Wilson’s superfighters.

The day eventually comes when Benson, Block, Topper, and the rest of the pilots get called out to the S.S. Essess aircraft carrier in the Mediterranean Sea to carry out the operation. Wilson and his assistant Rosener (Mark Arnott) come along as well, and shortly after Wilson overhears Benson finding out from the Pentagon that they will be striking tomorrow at 6:00 a.m., he gives one of the mechanics a signal to sabotage the planes, feeling that the planes need to fail in combat in order for the world to take notice and convince the President to buy his superfighters, despite the fact that he is going against a promise he made to Block that no one would get hurt or worse from their scheme. Early the next morning, Benson briefs the pilots on the operation’s objective, which is to strike and destroy a nuclear weapons plant at Falafel Heights before it goes online, and after he leaves, Block tells the pilots that Topper will be leading them into battle before ordering all of them to get to their planes. Having come to believe that Block is out to sabotage the mission (his suspicions having been stirred by Ramada [Valeria Golino] mentioning to him before he left that she noticed that somebody wants it to fail, plus she told him that she noticed that the recommendation she sent to Block stating that he be grounded didn’t receive any attention), Topper speaks to him alone and hints to him that he knows that he is not on the level, but in an attempt to appeal to his better qualities, he tells him that he hopes that he is playing it straight with him and the other pilots.

Shortly after the squadron enters enemy airspace, they receive word from the Essess that six Iraqi planes are heading their way. Block tells the pilots to assume combat spread and have Topper in the lead, and he then tells Topper that Buzz would be proud of him. As expected, Topper experiences an attack of paternal conflict syndrome and freezes up, and when the other pilots notice this and report to Block that Topper is now no good to them, Block orders them to abort the mission and return to the carrier. Unfortunately, the enemy planes are all over them at this point, so Block changes his mind and orders everyone to engage them. The pilots soon notice that their planes are suffering from various problems that prevent them from effectively fighting the Iraqis, and this causes Block to blurt out his realization that Wilson and Rosener are responsible for this, plus he voices his dismay over how they went back on their promise that no one would get hurt, and both of these things are heard by Benson and everyone else in the Essess’ communications room. Block is ordered to call his men back, but he refuses, saying that he has the best pilot in the world up here. He then tells Topper that he was there 20 years ago when his father and Mailman (Ryan Stiles) had their fateful flight, and what he had been told about his father is all wrong: Buzz did everything he possibly could to save Mailman’s life, but his attempts failed when he ended up falling out of the plane, and he should be proud of Buzz because he is a true American hero. His words help Topper get the confidence he needs to fight and destroy the Iraqi jets single-handedly using methods that don’t involve guns or missiles, but one jet survives and fires two heat-seeking missiles at him. Topper orders all of the other pilots to return to base because he is going to blow up the nuclear weapons plant himself, and after he realizes that he won’t be able to lose the heat seekers, he decides to have them follow him right to the plant so he can use them to destroy it. He reaches the plant’s location and flies in low, and after first dropping a bomb right down onto Saddam Hussein (Jerry Haleva) while he is lounging by the pool there, he pulls up away from the plant when he gets close to its primary building, sending the heat seekers into it and obliterating the whole plant.

Topper and the others successfully make it back to the Essess (though Topper’s plane doesn’t land in one piece, thanks to damage it sustained from the explosion), and Topper is cheered by everyone for his success, plus his rival Kent (Cary Elwes) even gives him some respect (he was Mailman’s son and blamed Buzz for his father’s death). Topper then comes up to Block as he is getting a blood transfusion, having sustained a wound in his shoulder during the battle, and before he is loaded onto a medical helicopter, Block commends Topper for his heroism. He then tells Topper that he had been keeping that secret about Buzz for 20 years, and he never said anything about it because he had wanted his father to fail so he could become the best pilot in the Navy, plus he was in love with Topper’s mother. Block then admits to Topper that he really was trying to ruin the operation because he thought that America needed the superfighters, but he realizes now that American planes will always be superior as long as great pilots like Topper are flying them (plus as long as the planes have German parts). Block then informs Topper that Wilson and Rosener sabotaged the jets, which the duo overhears. Rosener tries to run away, but Topper catches him in a safety net that slingshots him right into the ocean. Benson stops Wilson as he is trying to flee and calls him a disgrace to America and that he risked the lives of some fine pilots, then hits him with a punch that sends him rolling down a flight of stairs in the ship and into the chair of the dentist, who starts to painfully drill away at his teeth.

Topper is later shown staring out at the sunset, and he takes out the case with his father’s eyes in it and throws them into the ocean while he hears his father’s spirit tell him, “You looked good up there, son”. The Essess returns to port, and Topper spots Ramada in the crowd welcoming the pilots back and waves to get her attention, but then he sees Kent go up to her and embrace her. Thinking that Ramada is getting back together with Kent, he turns and walks away from her sight, unaware that Kent has needlessly told her that she must put him out of her mind because there is another man on the ship who needs her more than he does. She runs onto the ship to stop Topper while he is leaving on one of the jets, and though she chases him down the runway on a horse to try to get him to stop, he takes off before she can reach him.

Topper returns to the Native American village he was previously residing in, and he goes into Owatonna’s (Rino Thunder) teepee and hands him the package of AA batteries that he asked him to get while he was away. He also informs him about the success of Operation: Sleepy Weasel and that he met a girl during this period of duty, but she ended up throwing him a curve ball. Moments later, Topper is surprised by Ramada, who has come to the village to be with him, and she embraces and kisses him. 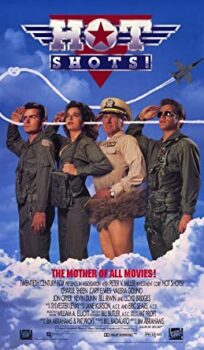