The Nurse (Jodie Foster) runs a secret no questions asked hospital for criminals called Hotel Artemis. One night, a crime lord called the Wolf King (Jeff Goldblum) arrives to be healed, but while he is being anesthetized, he confesses to having the Nurse’s son killed.

An assassin at the hotel, Nice (Sofia Boutella), knocks out the power to the hotel, causing Waikiki’s (Sterling K. Brown) brother to die when his life support fails. Nice then slits the Wolf King’s throat because she was paid to kill him.

The Wolf King’s men, including his son Crosby (Zachary Quinto), break into the hotel to kill everyone. Nice and Everest (Dave Bautista) hold them off, while the Nurse and Waikiki escape through the tunnels. Crosby confronts them and the Nurse kills him with a lethal dosage of tranquilizer.

The Nurse lets Waikiki escape, but returns to the hotel to continue to help people. As she arrives at the hotel, Everest lights up the neon sign. Nice’s fate is left unresolved. 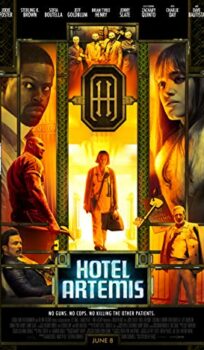