Short pooper:
Maurizio (Adam Driver) grows tired of Patrizia (Lady Gaga) and, upon engaging in an affair with old friend Paola Franchi (Camille Cottin), he files for divorce, eventually intending to marry Paola. Patrizia attempts to reconcile with Maurizio, but he rebuffs her. Seeing her lifestyle severely endangered, both from being cut off of what she sees herself entitled to and the company having been bought out by an external source to be saved, she hires, with the help of Pina (Salma Hayek), a hitman, who shoots and kills Maurizio. In the end, she, Pina and the hitman end up being convicted of Maurizio’s murder and sentenced to prison, and the Gucci Company has prevailed to present day at the hands of another corporation.

Longer version:
After the Police hunt down, and try to jail, Maurizio for him and Patricia forging the signature of Rodolfo (Jeremy Irons) so they could get half of the Gucci shares, they both flee to Switzerland. This, however, proves to be disastrous for their marriage and, eventually, the company itself; he reacquaints with an old friend and designer, Paola Franchi, which prompts him to send Patrizia and the children back to Italy after a heated argument. Shortly after, he starts an affair with Paola. Afterward, a poorly-conceived business plan that hurts the company forces Maurizio to seek help from equity company Investcorp, all the while attempting to acquire Paolo’s (Jared Leto) part. Paolo naturally refuses and Aldo (Al Pacino), who has just been released from prison, will not allow it; however, when Maurizio tells them he came up with the deal, Aldo is forced to sell his shares and disowns Maurizio.

Meanwhile, Patrizia attempts a reconciliation with Maurizio -even using the children as leverage-, but he, being fully involved with Paola, not only rebuffs her but also files for divorce. Not willing to jeopardize her interest in the Gucci empire (or her position and, in consequence, resulting privileges as the wife of a Gucci), enraged at the turn of events and goaded by her friend Pina, Patrizia hires Sicilian hitmen, to kill Maurizio.

Maurizio decides to reinvent the image and content of the company by putting his assistant Domenico De Sole (Jack Huston) and fledgling designer Tom Ford (Reeve Carney) in front of the operation; this has the unintended consequence of Investcorp, tired of Maurizio’s mismanagement, buying him out and fully replacing him with Ford and De Sole.

In March 1995, while walking towards his residence, Maurizio is chased down and shot to death by the hired hitmen. Upon being informed, Patrizia appears rejoiced, believing she will now be in full control of the company -she even writes PARADEISOS (“Paradise”, in Greek) on her personal diary-, but her happiness does not last.

The movie ends showing title cards that inform that Aldo and Paolo died destitute; Patrizia, Pina and the hitmen were arrested for the murder, tried and sentenced to long prison terms -Patrizia herself was given 29 years for being the mastermind, but was released for good behaviour after serving 18 years-; no one from the Gucci family remained as part of the company’s operations and it remained successfully under Investcorp’s wing, until it was later acquired by a French consortium which is still its parenting company to this date. 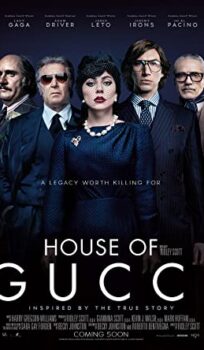