SHORT VERSION:
Jon Jon has a great house party at his uncle Charles’ place with Mark and T, and they score a potential record deal in the process. Monique shows up in the middle of it, and T winds up setting her straight about her desire to get Jon Jon busted for faking his illness to host this party, telling her that she is so stuck on being jealous about Jon Jon having fun with his life that she can’t have fun with her own, which is no one’s fault but hers.

By the time Charles returns home, the party has ended and all traces of it have been cleaned up, and Monique decides to not squeal on Jon Jon when she has a chance to. She drives him back home, telling him that she didn’t rat him out because he is her brother. She also tells him that he will be helping her skip school next week, and then they break the fourth wall and say “sequel”.

LONG VERSION:
Jon Jon (Marques Houston), Mark (Jerome Jones), and T (Kelton Kessee) perform a song at their house party, and Lisa Layme of Platinum Status Records (who is in attendance to talk business with Jon Jon’s uncle Charles [Roland Lewis] since he manages some talents that are signed to her label, and Jon Jon has been able to fool her into believing that Charles is there but keeping himself away from the party) tells Jon Jon that she liked their performance very much and is interested in offering them a record deal. A short time later, Jon Jon’s sister Monique (Alexis Fields) shows up to get evidence for their parents that he was lying about being sick and hosting this party at Charles’ house without his permission, and T spots her and finds and warns Jon Jon, who tells him to keep her occupied somehow. T talks to her and asks her what she has against her brother, and she replies that he faked his illness so he could housesit instead of her and then didn’t invite her to the party. T points out that Jon Jon didn’t send the invitations out to everyone but her; she just took it that way, and Jon Jon would have loved to have partied with her. He then tells her that she is just stuck on being jealous about him having fun with his life that she can’t have fun with her own, and that’s nobody’s fault but hers. After some thought, Monique accepts that T is right.

Later on, Jon Jon receives a call from Charles, who informs him that he, his wife Linda (Mari Morrow), and his mother Mable (Irene Stokes) have returned early from their Bahamas trip (after it went completely sideways and he, Linda, and Mable even had to make a getaway from a wanted murderer) and they will be home in an hour. Jon Jon first tells Mark and T about their potential record deal before warning them that Charles and company are coming home soon, so he orders them and his girlfriend Tina (Meagan Good) to start cleaning up while he gets the partygoers to leave by saying that all of the food and beverages are gone. After the gang restores the house to its original condition, Ray Ray (Chris Stokes) – the tow truck driver who had promised to fix some damage Mark and T had made to Charles’ car in exchange for them and Jon Jon letting his homely obese daughters Bertha (Jerod Mixon) and Heidi (Jamal Mixon) attend the party and show them a good time – enters the house to collect his daughters and supposedly drop off the car like he promised. However, when Jon Jon asks him about the car, he says that Bertha and Heidi had called him and complained that Jon Jon and his pals didn’t introduce them to anybody. Therefore, he informs Jon Jon that, while he did fix the car, he is going to have to come down to his auto shop and get it himself as punishment for not fully living up to his end of the deal. Jon Jon, Mark, T, and Tina drive on down to the auto shop’s lot, and while Tina and his friends say goodbye to him and return to their homes, Jon Jon manages to get the car out and then speeds on back to Charles’ house and gets it parked in the driveway just before Charles, Linda, and Mable arrive.

Monique comes out of the house to greet Charles just as Jon Jon is welcoming them back, and though Jon Jon thinks she is going to squeal on him, she instead says that she just came to bring him back home. After Monique and Jon Jon leave, Charles gets a call from Lisa Layme saying that she enjoyed herself tonight and will be sending a contract to him on Monday, but he is distracted by a news report he sees on the television about the killer he evaded and doesn’t give her his full attention, saving Jon Jon from being exposed (for the time being). After they get back home, Jon Jon asks Monique why she helped him, and she replies that she did it because he is her brother. However, she informs him that he is going to help her skip school next week, and then they break the fourth wall and say “sequel” before the film abruptly ends (even though the sequel that followed was not a direct sequel). 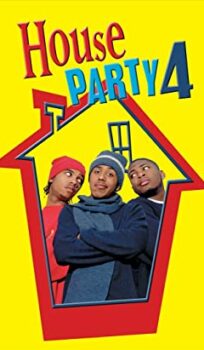