Kevin (Sinbad), Gary (Phil Hartman), and Emily (Kim Greist) return home one afternoon to find the mobsters Pauly (Paul Ben-Victor) and Joey (Tony Longo) holding the family at gunpoint, along with the real Derek Bond (Ron Glass), who had come to Gary’s house to find out why Kevin posed as him for a seminar that he was supposed to do (he got a newspaper clipping about the seminar and saw Kevin’s picture where his name was). Kevin finally admits to the Youngs that he isn’t Derek Bond, and he is then taken away by Pauly & Joey. After remembering all of the good things Kevin did for them, as well as learning from Derek how he discovered that Kevin owed the mob $50,000, the Youngs decide to go help Kevin.

In town, Kevin manages to escape Pauly & Joey and meet up with Gary, and together they run from the mobsters. While temporarily hiding out, Gary tells Kevin that he wants to help him with his debt problem, and Kevin reveals that he has an instant lottery ticket where he won a chance to spin the wheel on the game show The Big Spin. The wheel could land on cash prizes up to $1,000,000, and if he got $50,000 or higher, he could pay off his debt. Pauly & Joey then spot them, and they run, but they soon cross paths with Pauly & Joey again at a payphone as they are being chewed out by their boss Marcelli (Don Brockett). Kevin reluctantly offers them the lottery ticket in exchange for forgiveness of his debt, and after seeing what he won, they accept.

Six months later, Kevin shows up at the Youngs’ house in a new Porsche (his dream car) for a promotional party they are holding for his new best-selling book, “The Handbook For Houseguests”, which he wrote based on his experiences with them. He and the other partygoers watch Pauly, Joey & Marcelli spin the wheel on The Big Spin, and though the ball on the wheel initially lands on $1,000,000, it falls and lands on $5,000, and Kevin laughs at their misfortune. 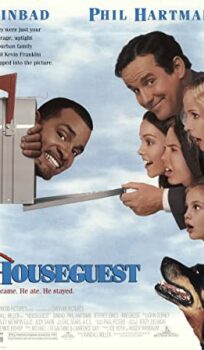