Huw (Roddy McDowall) recovers from his crippling injury in the spring.

Angharad (Maureen O’Hara) and the pastor of the chapel, Mr. Gruffydd (Walter Pidgeon), are in love, but he insists he could never ask her to share his life of poverty, so she marries the son of the mine owner instead, although she does not love him, and moves to Capetown, South Africa.

Of the six Morgan sons: Ivor (Patric Knowles) is killed in the mine (his widow Bronwyn [Anna Lee] gives birth to the first Morgan grandchild that same night), Gwilym Jr. (Evan S. Evans) and Owen (James Monks) emigrate to America, Ianto (John Loder) and Davy (Richard Fraser) emigrate to Canada and New Zealand, and Huw decides to drop out of school and join his father (Donald Crisp) in the mine.

Angharad leaves her husband in Capetown and comes back to the big mine owner’s house up on the hill, being so obviously still in love with Mr. Gruffydd that people talk evilly, although he is honorably careful never to give any indication that he returns her affection, but nevertheless he is forced to resign his position at the chapel, and makes plans to leave the valley.

There is a mine explosion and the father, among others, is missing. Some men, including Mr. Gruffyd and Huw, go down there to find them. They do, but the father dies in Huw’s arms.

Angharad and Mr. Gruffyd do not get together, apparently. 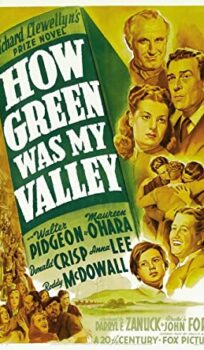