SHORT VERSION:
Everything comes to a head at Da Vinci’s castle. Darwin and Minerva Mayflower acquire all of the pieces of the crystal needed to make da Vinci’s Gold Machine work again, and then they double-cross and kill the corrupt CIA agents (the ones that Eddie and Tommy did not already kill), not wanting to share the spoils of victory with them. Eddie and Tommy attack the castle to try to stop the Mayflowers’ scheme and rescue Anna, but Eddie is captured and Tommy is apparently killed when he gets trapped in the Mayflowers’ limousine by Darwin and the butler Alfred, sent over a cliff, and then blown up with a bomb on the way to the bottom.

The next morning, Eddie and Anna are brought before the Mayflowers, and Eddie is forced to assemble the crystal. The crystal is put in its place and the machine gets turned on, but Eddie reveals to Anna that he secretly left out a piece of the crystal, and the incomplete machine soon explodes and kills Minerva. Eddie then starts laying waste to the machine’s control panel and the Mayflowers’ scientists, which causes Darwin to get electrocuted and creates explosions that start wrecking the castle. Eddie then kills Alfred as well as Minerva’s crazy dog Bunny, and he and Anna escape unscathed by flying out of a window with Da Vinci’s glider. They land in a nearby village and kiss.

As Anna takes Eddie to an outdoor café to buy him a cappuccino, Tommy shows up, clothed charred but alive and well, having survived the crash due to airbags and a sprinkler system installed in the limo. Eddie then finally enjoys a cappuccino.

LONG VERSION:
After stealing two of the crystal pieces, Eddie (Bruce Willis) demands for the Mayflowers – Darwin (Richard E. Grant) and Minerva (Sandra Bernhard) – to explain to him what they plan to do with them. They bring him to their office building and tell him about how they plan to reconstruct Leonardo da Vinci’s Gold Machine, which can turn lead into gold, and how they will use it to steadily flood the market with so much gold that it will end up losing its meaning, causing every stock market and financial empire to crumble, except for their corporation. They tell Eddie that he must retrieve the last crystal piece from Da Vinci’s helicopter design on display at the Louvre in Paris, but Eddie refuses the assignment.

They then bring in Tommy (Danny Aiello) – whom they had hired to keep Eddie in line – and leave him alone with Eddie so he can try to convince him to take the assignment. Angry with Tommy for taking this job over their friendship, Eddie gets into a fight with him, and a gun gets produced. The fight spills out onto the front steps of the building, and Tommy seemingly gets shot and killed. An ambulance then timely shows up, and Eddie loads Tommy into it and rides off with him.

The ambulance soon drives into a truck bearing the symbol of the Vatican, and it gets dropped off at the Forum Romanum, where Anna (Andie MacDowell) is waiting. Eddie emerges with Tommy, who faked his death, and Tommy and Anna explain to him that they had started working together when Anna approached Tommy and made him realize how much of a fool he was for trying to assist the Mayflowers with making their con work, and what just happened was all done to relieve Eddie from having to steal the third crystal piece and give him and Tommy the chance to return home. They all then spend the night at Anna’s place.

The next morning, Kaplan (James Coburn) and his agents enter Anna’s home and paralyze Eddie and Tommy with curare darts. Kaplan then produces a newspaper that shows that he and his agents have broken into the Louvre themselves and stolen the last crystal piece, which they will now take to Da Vinci’s castle to get the machine working again. Anna then arrives and is soon paralyzed herself, and the agents reveal to Eddie that she is a nun. Kaplan and Butterfinger (Andrew Bryniarski) then take Anna and leave for the castle, since they need her to decipher the code written in the diary of Da Vinci’s apprentice that explains how the three pieces fit together, and Almond Joy (Lorraine Toussaint) and Snickers (Don Harvey) stay behind to lay a couple of bombs to kill Eddie and Tommy, since they are useless now. However, their paralysis wears off much more quickly than expected, and they get the upper hand on the two agents, take their bomb gun, and get out just before the bombs they laid explode and kill them.

At the castle, Kaplan and the Mayflowers try to get Anna to decipher the code, but the curare has caused her to start talking a bunch of nonsense. Meanwhile, Eddie and Tommy enter the castle grounds and start shooting off bombs. In the mayhem that follows, the Mayflowers double-cross the CIA by killing Kit Kat (David Caruso) and Butterfinger, not wanting to share the spoils of victory with them. Alfred (Donald Burton) captures Tommy and brings him into the Mayflowers’ limousine with a gun-toting Darwin while he sits in the driver’s seat. Tommy and Darwin fight, and Darwin accidentally shoots Alfred in the neck, which causes him to put the car in motion. As this goes on, Eddie fights Kaplan, and as Kaplan tries to hit a flying kick on Eddie, Eddie ducks, causing him to fly over the castle wall and land on the hood of the limo. Darwin and Alfred escape the limo and lock Tommy inside, and Alfred shoots a bomb onto the back bumper. The car then goes over a cliff and explodes on the way to the bottom, killing Kaplan and (apparently) Tommy. In a rage, Eddie swings down on a rope and attacks Darwin, but Alfred quickly knocks him out.

The next morning, Eddie and Anna are brought before the Mayflowers, and Eddie is forced to assemble the crystal. The crystal is put in its place and the machine gets turned on, but Eddie reveals to Anna that he secretly left out a piece of the crystal, and the incomplete machine soon explodes and kills Minerva. Eddie then starts beating up the Mayflowers’ scientists and short-circuits the machine’s control panel in the process, which electrocutes Darwin and causes more explosions to start. Eddie then battles Alfred and make him decapitate himself on his own blades, and he lastly kills Minerva’s crazy dog Bunny before he and Anna escape the castle by flying out of a window with Da Vinci’s glider.

They land in a nearby village, and they share a kiss, but when Eddie asks Anna if God would be okay with her being intimate with him, she says that God has probably assigned her to keep an eye on him. As they enter an outdoor café so she can buy him a cappuccino, Eddie happily sees Tommy arriving on the scene, clothes charred but alive and well. He explains that a combination of air bags and a sprinkler system installed in the limo was what enabled him to survive the crash. Eddie then finally enjoys a cappuccino. 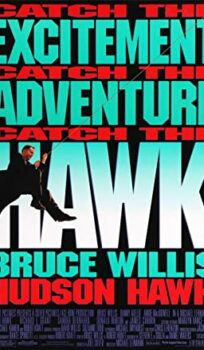