SHORT VERSION:
When the deadline for his trial offer arrives, Hunk takes his new love, Sunny, to meet Dr. D. He tells Dr. D that he wants to be Bradley again, having accepted that being a popular beefcake is not worth it if it means becoming one of his dark agents. Dr. D then reveals that Sunny is actually O’Brien in disguise, and she has a century-long deal with him that is expiring now as well.

O’Brien tells Bradley that she genuinely loves him and that she is too much of a romantic to keep recruiting nice guys like him for the Devil’s work, and she has been serving Dr. D all this time because she is afraid to return to being the person who sold their soul to him in the first place. Bradley begs her to leave Dr. D’s service and embrace her true self again, because – even though she said this to deceive him – she taught him that the real person exists on the inside, and he knows that a warm and loving person exists within her. O’Brien soon tells Dr. D that she is staying with Bradley, so he transforms her back into Sunny, which is her true form. We also find out from both Sunny and Dr. D that she is a 10th century princess named Lucilla, and because her father didn’t consider her to be as beautiful as her sister, he sold her to the Vikings. Not wanting to live that kind of life, she made her deal with Dr. D in order to escape it and become beautiful. Dr. D then departs, and seconds later, Lucilla’s shackles of servitude come off, and she explains to Bradley that she has been sent back to Earth to live out the rest of her mortal life.

The next day, Bradley tells Lucilla that she has inspired him to create “The Princess Program” for the company he works for, which details how to live royally on a regular week’s pay. She asks if he is at all disappointed that he gave up the new him and ended up with the old her, but he assures her that she has always been a beautiful woman and always will be, and they kiss.

LONG VERSION:
Hunk (John Allen Nelson) ends up falling for his psychologist Sunny (Rebeccah Bush), and she falls for him as well after he saves her life one day (while in the act of rescuing TV host Garrison Gaylord [Robert Morse], which was witnessed and captured on camera), and they end up kissing in her office the day after the rescue. After he leaves, Dr. D/The Devil (James Coco) suddenly appears, and Sunny then reveals that she is his agent, O’Brien (Deborah Shelton), in disguise. Dr. D accuses her of being in love with another potential agent for his dark deeds, bringing up how she had fallen for some past candidates and ended up swaying them away from his service. She tries to assure him that Hunk is theirs, since she has been encouraging him to accept the various fortunes that he never would’ve gotten as Bradley (Steve Levitt), but she gives off a bit of doubt that he is on the path they want him on. Dr. D warns her that her own deal with him expires the day after Labor Day (the same day Bradley’s trial offer concludes), and if she fails to convert Hunk before then and fulfill her requirement of obtaining one soul per century, he will turn her back into her old self. O’Brien gets scared upon hearing this.

Hunk becomes a celebrity after saving Garrison, but after two weeks of unrelenting fame and attention, he grows very tired of it and even lashes out at his fans. Then, the night before Labor Day, Bradley visits Hunk in his bedroom and wakes him while Sunny continues to sleep, and he tells Hunk that he has been in Hell all this time. He chastises Hunk for becoming a sleazebag and says he has let evil taken root in his soul, and Bradley reminisces about how he, while lonely, was a nice soul. Hellish beings then try to get in through the bedroom door to get Bradley, and while Bradley holds them off, he warns Hunk that Hell is for real, and none of the success he has gotten is worth becoming a demon for Dr. D. Before the hellspawn finally break in and drag him back to Hell, Bradley tells Hunk that he knows he will make the right decision in the end. Hunk then wakes up Sunny and tries to show her the passageway to Hell, but the door has returned to normal by this point. Sunny tells Hunk that he is just upset because, by the end of Labor Day, his Bradley “fantasy” will be over, and she says she wants it to be just the two of them and not the three of them. Hunk tells her that he is glad to have her in his life. She soon goes to take a shower, where Dr. D greets her, and he tells her that she must keep Hunk awake tonight, because if he has one more dream where Bradley shows up, he will likely back out of the deal. He then disappears, and Hunk comes out and joins her in the shower, and she tells him she loves him.

That night, Hunk and Sunny attend a banquet hosted by Sea Spray’s Homeowners Association where he is being presented with a key to the city, but when his rival Skeet (Doug Shanklin) attempts to give it to him, he accidentally hits him in the head with it and knocks him out. Subsequently, Hunk has a dream about himself, Dr. D, O’Brien, and a bunch of Dr. D’s minions turning Sea Spray into the starting point of World War III, and him killing all its citizens single-handedly. Dr. D then tells him that he must shoot and kill Bradley to truly commit himself to his work, since Bradley is his better half. Bradley – who is tied up nearby – pleads with Hunk to not give in to the false promises of a better existence and not initiate such a devastating war, but Hunk shoots him multiple times. Hunk then awakens, and after finding out that it is ten minutes to midnight, he forces Sunny to come back to his beach house with him so she can meet Dr. D and thus prove to her that he hasn’t been lying about anything pertaining to him.

After they reach the property, Sunny asks Hunk who he will be in a minute from now, and he decides that he wants to go back to being Bradley. He then begs her to remain in love with the man inside regardless of how he will appear, and Sunny tells him she does love the man inside, but he must accept who he is. He replies that she sounds like O’Brien sometimes, and the only limitation in their relationship is that she doesn’t understand what he has been through, but that will change when she sees Dr. D. He then takes her inside and meets up with Dr. D, where he tells him that he will not be taking him up on his deal and demands for O’Brien to appear so Sunny can meet her. First, Dr. D turns him back into Bradley, and then he informs Bradley that the game is up for Sunny as well, and he transforms her into O’Brien.

Shocked, Bradley tells O’Brien that he thought she loved him, and she replies that she does, and admits to lying to him to try to get him to close the deal. She gives him the details of her own deal with Dr. D, and she says that she is too much of a romantic to keep recruiting nice guys like him for the Devil’s work. When queried by Bradley as to why she kept doing it, she answers that she is afraid to return to being the person who sold their soul to Dr. D in the first place. He reminds her that she taught him that the real person exists on the inside, even if it was to deceive him, and the love he felt from her came from some wonderful person. Dr. D then tries to offer them both a six-month extension on their deals, but Bradley steadfastly refuses and begs O’Brien to do likewise and embrace her real self again, knowing that a warm and loving person exists within her. After some thought, O’Brien tells Dr. D that she is staying with Bradley.

Dr. D transforms O’Brien back into Sunny, which is her true form, and Dr. D explains that she is a 10th century princess named Lucilla. Through Dr. D and Lucilla, Bradley finds out that her father didn’t consider her to be as beautiful as her sister, so he sold her to the Vikings. Not wanting to live that kind of life, she made her deal with Dr. D to escape it and become beautiful. Dr. D then departs, and seconds later, Lucilla’s shackles of servitude come off, and she tells Bradley that she has been returned to Earth to live out the rest of her mortal life.

The next day, Bradley and Lucilla are walking happily together along the beach. When she expresses concern over how the program he was supposed to create for his company is due today, he tells her he already came up with it last night: “The Princess Program”, which details how to live royally on a regular week’s pay, and her real self was his inspiration. She happily hugs him, and then asks if he is disappointed that he gave up the new him and ended up with the old her, who “is always second best”. He confidently assures her that she isn’t second best and never has been or will be, and they kiss before they continue on with their stroll. 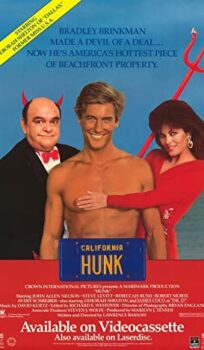