Daniel Blake (Dave Johns) is a carpenter living in Newcastle, England who suffers a heart attack while at work one day. Although he survives, his cardiologist rules him as being unfit to return to work in case he starts to develop an abnormal heartbeat. Daniel applies for and is granted a sickness benefit, but one day the Department of Work and Pensions (DWP) requires him to undergo an assessment with them. Daniel, who assumes that the DWP will contact his doctor for information on his condition (they don’t, nor do they actually have a healthcare professional conduct the examination), undergoes the strict assessment only to be found to be fit to work. Therefore he is denied sickness benefit and forced to start claiming Jobseekers Allowance instead, one of the conditions of this benefit being that he must now actively look for a job despite the fact that will be endangering his health by working.

Daniel launches an appeal, but while he waits he is forced to apply for jobs that he would be unable to take up even if he gets them. He befriends single mother Katie (Hayley Squires) and her two children, who were forced to move from London to Newcastle since the housing is cheaper but because Katie got lost on her way to the job center (due to being in an unfamiliar area) was only just late to her appointment and has been denied any kind of financial support. As a result, she cannot feed her kids or heat her flat forcing her to survive on whatever is on offer at a local food bank to her great shame. The two bond over the shared injustice they’ve suffered at the hands of an institution that does not care about anything but employment targets.

The DWP feels that Daniel isn’t doing enough to find a job, not caring that finding work will endanger Daniel’s life. Daniel becomes very withdrawn thanks to the stress he is suffering at the hands of the DWP, as he is forced to sell all his possessions and turn down work he’s offered. At one point, he spray paints “I, Daniel Blake, demand my appeal date before I starve” earning him a warning off the police. Eventually the appeal arrives and Daniel’s adviser tells him he’s got a sound case so should get back everything he’s entitled to. The stress however is too much for Daniel, and he suffers a fatal heart attack before the hearing. He has a pauper’s funeral, with Katie reading the eulogy. 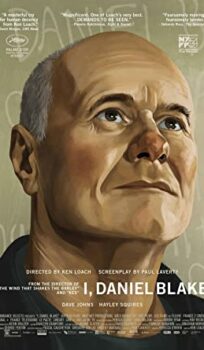