After surviving a horrible car accident, Kuki Gallmann (Kim Basinger) decides to marry Paolo and move with him and her son Emanuele to Kenya.

Years later, Kuki is expecting a daughter when she learns that Paolo is killed in a car accident. Devastated but resolved to stay in Africa, she dedicates herself to stopping poaching in Africa and protecting the land.  Shortly before Emanuele is due to leave for college, he is bitten by a poisonous snake and dies.  In the end Kuki recognizes that they led extraordinary lives in Africa, but she also paid the highest price for her happiness – the loss of her husband and son.

It is never revealed what is in the ostrich egg that Paolo gave Kuki. He stated she would know when the time was right to open it and read the special message inside he left for her. 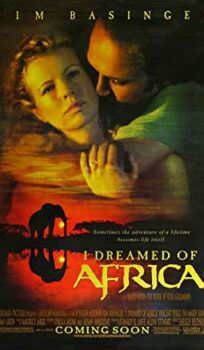