The film begins with a woman’s car breaking down in the snow. While talking on the phone to her husband Kim Soo-hyeon (Byung-hun Lee), whom we learn is a Korean secret agent, she’s approached by a stranger parked nearby, asking if she needs help but also appearing very suspicious. Following her chat with her husband, the woman is attacked by the stranger with a hammer. Afterwards, in the stranger’s hideout, the woman is tortured and killed quite brutally, but not before revealing to the killer that she was pregnant.

After finding her body in a lake, Kim Soo-hyeon vows revenge on the killer. Unlike most typical revenge scenarios though, Soo-hyeon plans to do much more than simply kill this psychopath, who we soon discover is named Kyung-Chul (Min-sik Choi). After discovering the location of Kyung-Chul’s hideout through his connections, Kim Soo-hyeon confronts Kyung-Chul and nearly beats him to death, before relenting and shoving a tracer down his throat. Kyung-Chul awakens to find an envelope full of money, given to him by Kim Soo-hyeon. We discover, although Kyung-Chul remains oblivious at first, that Soo-hyeon does not want him dead, but instead to suffer as much as humanly possible. Despite the warnings and pleas of his murdered wife’s sister and father to stop what he’s doing, Soo-hyeon continues his bloody quest for vengeance.

After nearly killing a helpless nurse, Kim Soo-hyeon once again intervenes and tortures Kyung-Chul, slicing his achilles tendon. Once again, Kyung-Chul regains consciousness and finds himself stranded in the middle of nowhere but still alive. Kyung-Chul meets up with some acquaintances at a house they had previously robbed, while Kim Soo-hyeon is still in pursuit. Soo-hyeon again viciously attacks the 3 psychopaths, and beats Kyung-Chul senseless. Again waking up in a random place, Kyung-Chul begins to catch on to Soo-hyeon’s M.O.. He find’s the tracer, and contacts the police, telling them that he plans on turning himself in (so Soo-hyeon will be unable to murder him), but not before he finishes some business.

Before Kim Soo-hyeon is able to catch on to Kyung-Chul’s plan and warn them, Kyung-Chul brutally attacks Soo-hyeon’s father-in-law and sister-in-law, who is left for dead on the street. While he attempts to turn himself in to the police, thinking he has gotten away, Soo-hyeon shows up and wheels off with Kyung-Chul. Kyung-Chul awakens to find himself tied up inside his home. After being tortured and stabbed, Kyung-Chul still appears empowered, telling Soo-hyeon that he’s lost, that “I feel no pain, no fear, nothing.” Despite this, Soo-hyeon leaves Kyung-Chul, who now has a rope tied from his mouth to the door. While Soo-hyeon leaves, an older man and woman and a small child exit a taxi and approach the hideout. Upon hearing their reactions to the door not easily opening, and Kyung-Chul’s pleas for them not to open the door, we realize this is Kyung-Chul’s family. Soo-hyeon achieves his ultimate revenge, as we soon discover that the rope being held by Kyung-Chul’s teeth was holding up the blade of a guillotine. Kyung-Chul’s family inadvertently beheads him. Upon hearing their screams, Soo-hyeon, walking away still, begins to cry uncontrollably, despite having gotten what he wanted. 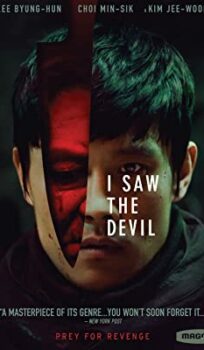