Pooper:
Jennifer brutally kills all four of her rapists, and then boats away victorious.

Long Ending:
An author named Jennifer (Camille Keaton) decides to leave New York City to spend the summer in a secluded rural town at a lake house. She intends to write her first novel while there. On the way, she meets a gas station attendant named Johnny (Eron Tabor) and his two friends Stanley (Anthony Nichols) and Andy (Gunter Kleeman). The trio leer at her as Johnny fills her gas tank. Later she orders some groceries to be delivered to her house. A mentally-disabled young man named Matthew (Richard Pace) delivers the groceries to her on his bicycle. Matthew mistakes her kindness and big tip as a sign that she is romantically interested in him.

It turns out that Johnny and his pals  are friendly with Matthew. One night while they are bored and hanging out in the woods, Matthew tells them an untrue story that Jennifer showed him her breasts. They mock him for lying and being a virgin, but are still aroused by his story. The three men begin to stalk her, harassing her while she wears a swimsuit at her lake house and possibly watching her house at night.

One day, while Jennifer is lying in her canoe, Stanley and Andy approach on a motor boat and tie her canoe to their boat. They drag her canoe to shore and begin slapping her. Jennifer attempts to fight back and eventually runs into the woods, with her two assailants in hot pursuit. While in the woods, she runs into Matthew and Johnny, who were waiting to ambush her. Johnny punches Jennifer to the ground. Andy and Stanley hold Jennifer down and try to convince Matthew to lose his virginity to her. When Matthew refuses, Johnny rapes her instead. Some time later, Jennifer recovers and begins making her way back to her house. Much to her horror, the men manage to track her down and this time, she is raped by Andy while the other three hold her down.

Finally, Jennifer manages to crawl to her house and tries to call the police. Unfortunately, the foursome were waiting there and destroy the phone before she can make the call. Stanley savagely beats her and this time, they manage to convince Matthew to rape her. They also find and mock her novel’s manuscript before tearing it to pieces. Jennifer is unconscious and bloody as they leave the house. Johnny orders Matthew to go back in and kill her as they dispose of her canoe and other evidence of the rapes and beatings. Matthew can’t bring himself to do it and instead, he wipes the knife in a pool of her blood and lies to the guys that he killed her.

After two weeks, Jennifer recovers, but doesn’t go to the police. Instead, sje writes a new novel and goes to church to pray for forgiveness for what she is about to do. Meanwhile, the men are concerned that Jennifer’s death has gone unreported. Johnny is especially concerned as he is married and has kids and doesn’t want to be sent to jail for the rapes. He orders Andy and Stanley to go to Jennifer’s house to check on the body. When they get there, they find Jennifer scarred but alive, staring at them defiantly. In anger, Johnny, Andy and Stanley beat up Matthew for lying to them.

Jennifer begins her plot by ordering groceries for Matthew to deliver to her. Matthew brings a knife along, intending to kill Jennifer for making his friends hate him. Instead, Jennifer manages to seduce Matthew in the woods, where he says he was forced into his actions by the others. As Matthew begins to have sex with her, she ties a noose around his neck and hangs him. She then throws his bicycle and corpse into the lake. Jennifer then goes to confront Johnny at gunpoint. Johnny blames her for the events, saying she was asking for it. Jennifer pretends to agree with him and asks him back to her house for a rendezvous. While there, she castrates him and he bleeds to death. She then burns his corpse.

Johnny’s wife is furious when he doesn’t return home and she contacts Andy and Stanley for help. Knowing that Jennifer is the likely culprit, they take the motor boat to her house to take care of her once and for all. Jennifer hears the boat coming and manages to get the jump on the two, pushing both into the water. They blame each other for the rapes and beg for their lives, but Jennifer shows no mercy and kills them both. She leaves their corpses  to rot in the lake. Jennifer then drives the boat away from the lake house, having exacted her revenge against her brutal tormentors. 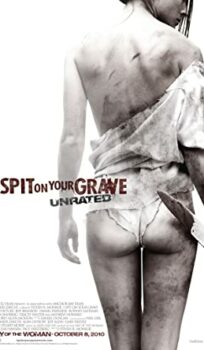