Frankie (Burt Lancaster) and Noll (Kirk Douglas) are partners in crime, running booze during prohibition.  They have a deal, if either goes to jail, when he gets out of jail things will be split 50/50.  Frankie goes to jail for 14 years.  By then, Noll has become a wealthy nightclub owner.  Frankie thinks he should have half of it, but Noll says Frankie should only get half of what they had when Frankie went in jail.

Frankie tries to take what he thinks should be his by force, but ends up beaten up in an alley by Noll’s thugs.

Noll has a girlfriend Kay.  He foolishly tells her that he plans to marry a wealthy socialite, who will help build up his nightclub, and keep Kay as a mistress on the side.  Kay leaves Noll to help Frankie.  Frankie and Kay force Noll to write out a confession of all his crimes, which Frankie gives to the police.  Noll breaks free from the police and tries to kill Frankie.  Noll is shot by the police. 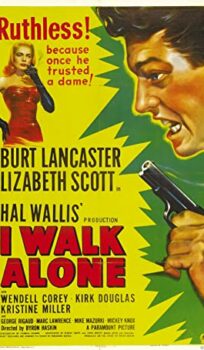