SHORT VERSION:
Manny, Sid, Diego, and Granny get back to the continent on an iceberg ship they steal from Captain Gutt, but they find that Ellie, Peaches, Crash, Eddie, and the rest of the animals traveling with them have been captured by Gutt and his crew. Gutt – who has Peaches in a headlock – challenges Manny to come over to his own iceberg and get his family, and he has him tied up once he crosses over. Suddenly, Peaches’ timid molehog friend Louis steps forth and orders Gutt to let the mammoth go. With derisive amusement, Gutt has one of his crewmen toss Louis his knife so they can have a duel, and while trying to wield it, Louis throws the knife into the air and it comes down blade-first into the ice, causing a crack to form. While Gutt is distracted with this, Louis slams a chunk of ice down on his foot, which makes him release Peaches.

The Herd then battles the pirates, during which Shira officially betrays Gutt and sides with the Herd. Granny calls upon her never-seen pet Precious to help out, and the Herd discovers that Precious is real when a giant whale suddenly appears. With Precious’ assistance, all of the pirates are beaten except for Gutt, and Manny finds himself facing Gutt one-on-one. Manny eventually wins when he grabs hold of a log and uses it like a baseball bat to whack Gutt and send him flying into a distant part of the sea. Gutt later pops up from the water and grabs hold of a small ice floe, but it turns out that he is very close to an island inhabited by sirens, and one of them takes on the form of a female of his species, lures him in, and eats him.

The Herd officially welcomes Granny and Shira into it, and with their homeland now destroyed, they and all the other animals board Manny’s ship and go towards the beautiful land where Switchback Cove lies (the place where they first stole the ship from Gutt) to make that place their new home. Manny gives Peaches his blessing for her and Louis to explore the new land on their own and even praises Louis for his bravery, and the duo also wins the respect of the teenage mammoths that Peaches was trying to befriend.

LONG VERSION:
At Switchback Cove, Manny, Sid, Diego, and Granny are able to make off with the iceberg that serves as Captain Gutt’s ship, thanks to receiving help from a tribe of hyraxes that Gutt and his crew had enslaved most of into building and supplying the ship, as well as getting an assist from Shira, who betrays Gutt by keeping him from trying to board it just before it hits open water (Shira changed her ways due to a combination of Diego pointing out that Gutt never sent out any search parties to look for her after she got separated from him and the crew, and then Gutt himself removing her as his first mate upon her return for not killing Manny or Diego when she had the chance). Not one to be easily beaten, Gutt breaks off a massive chunk of ice from the cove to serve as a makeshift vessel, and after he and his crew hop aboard it, a group of narwhals under his command push it along. Gutt grabs hold of Shira and vows that he will have a tiger skin on his wall when his business with Manny has settled and he doesn’t care whose, and he then swears to destroy Manny and everything he loves for taking his ship, his bounty, and now the loyalty of his crew. As the Herd sails on back to the continent, Diego finds that he has already developed feelings for Shira.

The next day, Ellie, Peaches, Crash, Eddie, and the plethora of other animals traveling with them finally reach the land bridge, but they discover that it has been destroyed, and the gargantuan shifting landmass behind them is getting ever closer. Around the same time, Manny and company reach the broken bridge, and Manny desperately calls out to Ellie and Peaches, but gets no reply. As he and his friends begin to think that they didn’t make it, Manny hears Peaches calling out to him, and they spot her as they draw closer to shore. Unfortunately, she turns out to be on Gutt’s ship when Gutt suddenly walks up behind her and puts her in a headlock, and we see that he and his crew also have Ellie tied up on a section of ice sticking out of the deck and have the other animals trapped on a tower of ice. Gutt challenges Manny to come and get his family, after which his crew tosses makeshift grappling hooks over to Manny’s ship to bring the ships together.

Manny walks onto Gutt’s ship and is soon tied up, but then Peaches’ timid molehog friend Louis appears and orders Gutt to let the mammoth go. Out of derisive amusement, Gutt orders his crewman Gupta to give Louis his dagger so he can fight him with it, but as Louis tries to wield it properly, he sends it up into the air and it comes down blade-first into the ship. The impact causes a big crack to start forming in the ice, and while Gutt is distracted with this, Louis slams a chunk of ice down on his right foot, which hurts him enough to make him relinquish his grip on Peaches. After Louis runs off with Peaches, Manny breaks free of his bindings and begins the final battle. When Sid and Granny get cornered by two pirates at the bow of Gutt’s ship, Granny calls out to her never-seen pet, Precious, who turns out to be real when a big whale comes up behind them. Her presence scares the pirates away, and Sid and Granny then hop into her mouth. Shira joins the Herd in the fight against the pirates, and Precious soon uses her blowhole to shoot jets of water at the enemies with help from Sid, and all of them fall into the ocean except for Gutt.

When Manny goes to rescue Ellie, Gutt disconnects the ships to keep Manny trapped on his. Thankfully, Peaches uses her possum-like abilities to swing from a vine hanging off the ship’s mast over to Gutt’s ship, where she kicks Gutt hard into a wall and then frees her mother, and Manny then pushes down one of the masts on his ship to act as a bridge so he can go over to them. Shortly afterward, they notice that the broken land bridge is threatening to come down, so Manny gets Ellie and Peaches onto his ship, but the revived Gutt stops Manny from joining them. A large chunk of the bridge then falls in the distance and impacts with the ocean floor, causing a section of it to rise up and break off the part of Gutt’s ship that Manny and Gutt are standing on, after which they start sliding on it down the raised seabed. They duke it out as they go, and soon after Manny notices that the raised seabed ends with a rock ramp, Gutt gets a hold of a log and prepares to use it on him. However, Manny jumps backward and lands on an outcropping beneath the ice’s surface, catapulting Gutt into the air, then he grabs the log and uses it like a baseball bat to whack Gutt and send him flying far away. Manny then hits the ramp and goes flying, but Precious catches him in her mouth in mid-air. Moments later, we see Gutt emerge from the sea and grab onto a small ice floe, but he is very close to the island of the sirens that Manny and his pals earlier encountered and avoided, and one of them takes on the form of a beautiful female of his species. He takes the bait, but by the time he realizes his mistake, the siren gets him and makes dinner out of him.

Precious brings Manny, Sid, and Granny back to the ship, and Manny reunites with Ellie and Peaches while Granny and Shira are welcomed into the Herd. Peaches praises Louis for standing up for her, to which Louis responds by telling her what she once told him: “No matter what, you never leave a friend behind”. With their homeland gone, the other animals join the Herd on Manny’s ship, and they have Precious push them to the land where Switchback Cove is so they can make that place their new home. They are happily greeted by the hyrax tribe, and Manny decides to ease up on protecting Peaches by letting her and Louis explore the new land freely. Peaches and Louis also gain the respect of the group of teenage mammoths that Peaches was trying to befriend.

*In Scrat’s story, Scrat comes across a treasure map drawn on the inside of a broken acorn shell, and despite several misadventures, he follows the map’s instructions until he reaches a group of islands shaped like an acorn when looked at from a certain angle. He finds a beautiful paradise there called Scratlantis, which is populated by more intelligent, English-speaking members of his species and has acorns aplenty. Scrat’s base desires overtake him and he started hoarding as many acorns as he can, but then he gets drawn to a giant one in the center of Scratlantis. As he tries to pull it out of the floor, the leader of Scratlantis begs him to be more than a rodent and rise above his desire for acorns, but Scrat just can’t resist it and yanks it out. Unfortunately, he discovers that this giant acorn has a sink stopper attached to the bottom of it so the ocean can’t flood Scratlantis, so Scratlantis is thus submerged, destroyed, and its remains sucked down into a hole on the ocean floor, with Scrat getting his head stuck in the drain. The continent of North America rises out from under the water, and when Scrat gets his head free, he finds himself in a desert with no acorns again and screams in utter exasperation. 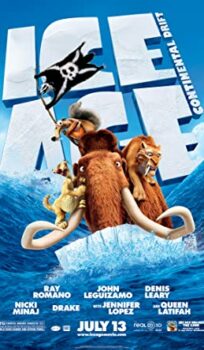