It turns out that none of the characters are ‘real,’ nor is the hotel. It’s all in the mind of a convicted killer named Malcolm Rivers (Pruitt Taylor Vince), who is about to be executed. His psychiatrist (Alfred Molina) believes that he is suffering from multiple personalities and that Malcolm is currently in a state where the personalities are fighting for survival. Thus the hotel setting, and why different personalities are being picked off. After much mayhem and several gruesome killings, it appears that all of the violent personalities are eradicated and that only the ‘Paris’ (Amanda Peet) personality survives. Malcolm Rivers’ sentence is commuted when the psychiatrist’s theory is apparently proven. However, as Malcolm is being transported to a mental hospital, the child ‘Timmy’ (Bret Loehr) personality re-appears within Malcolm, ‘kills’ Paris, while at the same time Malcolm chokes the psychiatrist. The van that Malcolm and the psychiatrist are riding in, comes to a screeching halt.

The last thing we hear is the child voice completely taking over Malcolm’s personality, thus solidifying his identity.

Carl G. added the following VERY interesting quote from Charlie Kaufmann in Adaptation, along with his personal observation:
“The only plot device more overused than serial killers is multiple personalities”–and this has both! 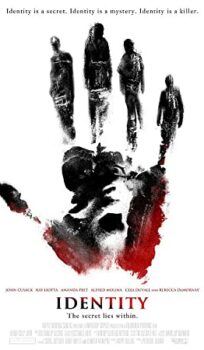